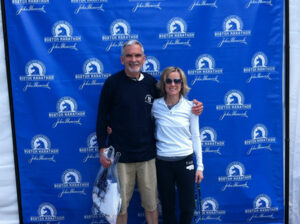 “Average.” That’s what 33-year-resident Mike Hovagimian uses to describe his athletic skills. It’s that same term that was the catalyst for his conversion from a spectator of the Boston Marathon to a runner.

Hovagimian, a father of two, was born in Worcester and moved to Hopkinton in 1986 to provide a better environment to raise his family. Like many residents, he took part in the traditions of the Boston Marathon, joking that the “aggressive” reminders that came with it were hard to ignore. Hovagimian would walk down to the end of his street to the course to watch runners finish the first of 26.2 miles that stretched to Boston, amazed at the wide variety of participants — different ages, body types, male, female — some elite, some simply average, like him.

“I looked at myself and thought, ‘I look just like a lot of these people,’ ” Hovagimian recalled. “For 3-4 years I did a lot of talking that I was going to do it, and finally a group of people goaded me and told me to put my money where my mouth is.”

Hovagimian used two milestones, his 40th birthday and the 100th running of the Boston Marathon, as a sign to give it a go.

He recalled, “I saw it as a two-for-one special. I would be a part of the historic event and hold on to my youth a little bit before turning 40.”

On Nov. 1, 1995, Hovagimian went from average to a marathon runner in training, doing a half-mile loop around his neighborhood to start preparing so he could do it 52 more times. Six months later, running as a bandit, he remembered the feeling when he completing a goal that was years in the making.

“When I finished it was a feeling like nothing I’ve ever experienced,” he said. “There was always a point in the race to stop, where I said, ‘I wish this were over,’ but when I actually did finish I was so glad I didn’t stop, that it was over, and that I did finish it. I felt really fulfilled.”

A month later he committed to doing it again the following year, this time as a registered runner.

“I never was one of those people who likes running. I do the running through the year as a means to the end with the end of doing Boston, and I look forward to doing it as long as I physically can,” he said.

The means is working, because more than two decades later he’s still here.

Hovagimian, now 62, is running for the Hopkinton Historical Society, and he said the experience and support he’s felt so far has been incredible. All of the funds raised, which will be matched by Dell, will aid the efforts of the small nonprofit to preserve the history of the community.

Hovagimian trains no more than five hours a week, running 4-6 miles two days a week and 12-18 miles on Sundays. His favorite part of the race? The food at the end.

His goal is to become a member of the exclusive quarter-century club, which recognizes people who have run the race 25 consecutive years.

To support Hovagimian and the Hopkinton Historical Society, visit: https://dell.yourcause.com/public#/fundraising/5119.