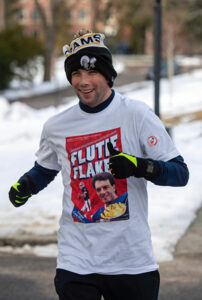 Mike Palmer has overcome a number of health obstacles to prepare for his first Boston Marathon.

According to his mother, Mike Palmer is one of those kids “you don’t say ‘no’ to, because all that does is make him dig his heels in even harder.” He was born with low muscle tone due to a premature birth and had to have three back surgeries to correct scoliosis — all while dealing with challenges associated with Asperger’s syndrome, a form of autism. Yet the 2012 Hopkinton High School graduate resolved he would run the Boston Marathon.

He approached it like many other things in his life: He dug in his heels, stuck to his training plan and will be at the start line on Patriots’ Day.

“Growing up in Hopkinton, I always wanted to do it,” Palmer said. “It’s been challenging, I think there are some days I ask myself, ‘Why in the world am I doing this?’ But the reward will be crossing that finish line.”

Palmer’s mother, Karen Weiskerger, said the family moved to Hopkinton in large part because of the town’s strong school system and its ability to deal with her son’s health challenges. School was difficult for Palmer, he and his mother said. He loved sports but could not compete with teams, so he worked as a team manager. He is on the autism spectrum, but he’s right on the edge, which Weiskerger said made it difficult for him to fit in with any particular group of peers.

“I had so many back issues growing up, it was tough, fitting in and finding a group to fit in with was tough,” Palmer said. “I was involved, but I didn’t feel like I was ‘there’ completely.”

Every year, when Marathon Monday rolled around, Palmer talked about running the race, but his mother never really encouraged it because her son had never run a mile before. After a third surgery, Palmer said his back began to feel better than ever.

As anyone who has trained for a marathon knows, the process involves much more than a simple decision to enter the race. Palmer began running four to five times per week last fall and started a specific marathon training program in December.

Describing the training as “intense,” he dedicated days for running hills, doing speed workouts, completing tempo runs and, of course, taking on the long runs meant to built up stamina for the 26.2-mile trek from Hopkinton to Boston.

Some days Palmer, who now lives in Boston, would hit the gym in the morning, work a full day and run after he got home at night. Twelve- or 15-hour days were not uncommon, he said. He’s run in the rain, the cold, the heat, the snow, you name it, to get himself mentally prepared for the race.

And he’s found a team to help him along the way. Megan Mahnks and Will DiTullio, two fellow runners, have been instrumental in helping him train, and his mother said the process has helped him forge some lifelong friendships.

Palmer also has dedicated himself to raising money for the Doug Flutie Jr. Foundation, which helps families affected by autism. With the help of some organized fundraisers and the social media savvy of his sister, Jenna Weiskerger, Palmer had raised more than $7,500 by April 1 and hopes to get that number even higher by race day.

“Anyone who has a child who sits anywhere on the spectrum will tell you, it’s a family affair,” Karen Weiskerger said. “When Mike decided to run for Flutie, we were all in, because we knew it was the perfect match.”

Palmer’s family will be at the start line to see him off in the town he once called home. But Palmer lives on Commonwealth Ave. now, not far from the finish line, and that’s where he’s set his sights.

“It’s going to be absolutely crazy,” he said, imagining the finish. “It’s going to be a joyful moment and I hope it takes an hour to go through that one spot, I want to take it all in. The past six months I’ve been working towards crossing the finish line and receiving that medal, and I can’t wait to do it.”