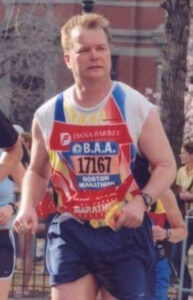 Brian Herr is going out his way.

Two years ago, the longtime Hopkinton resident’s streak of 27 consecutive Bostons (29 if you include two unofficial finishes) ended following a major skiing injury, as Herr broke his leg and tore both his ACL and MCL.

“The doctors said then my days of marathoning were over,” Herr recalled. “I understand now why they said that. Training is far more difficult this year than in years past.”

Driving Herr is the desire to make his own choice regarding when he puts away his running sneakers for good.

“I want to go out on my own terms and step on the finish line one last time,” he said.

Once again — as he has every year he’s run officially — Herr will raise funds for Dana-Farber Cancer Institute. He was part of the organization’s inaugural charity group three decades ago.

“This is the 30th anniversary of our fundraising efforts,” he said. “Thirty years ago myself and 18 others ran the inaugural Marathon Challenge. We raised $100,000 that year. Since then thousands of runners have participated in the event. This year we will surpass $100,000,000 raised!

“It’s really cool being the only participant through all 30 years, watching the growth of the event, and seeing the amazing discoveries in cancer research funded by our ‘sweat equity.’ “

Herr, who is in his fourth (and final, he has said) term on the Hopkinton Board of Selectmen, plans to make this race a memorable one.

“I do plan on going slower and taking it all in,” he said. “That may be an excuse conjured up in my mind because I am so much slower now. I will probably have to run 11-minute miles. I used to run [eight-minute miles]. I do want to enjoy it as much as possible, though.”

His favorite memories of the race include seeing the Dana-Farber patient partners at Mile 25, the finish line and the start line.

Also, “seeing the same people along the course, in the same spot, year after year,” he said. “The marathon is an annual tradition for runners and spectators alike. My wife and kids have been at Mile 8 and 20.5 for the last 22 years — including last year in the monsoon.”

Despite his vast experience, Herr said he still gets some nerves leading up to the start of the race.

“It still feels very much the same [each year],” he said. “[There is] anxiety about the coming pain, excitement to get started in Hopkinton, and then the waves of energy and exhaustion that challenge you more mentally than physically until you get to the last mile, then controlling my breathing so I don’t hyperventilate and collapse as I see the finish line just down the street.”

Added Herr: “All things considered, my body has held up very well over the years. I think my training and marathons has me close to running the circumference of the earth.” 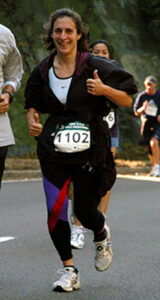 Kathy Curry is running her eighth Boston Marathon, and for the second time she will be running to raise funds for the Hopkinton Music Association.

“Each year I run the Boston Marathon, I do so for a charity that benefits Hopkinton,” Curry explained. “I did not lead a privileged life, and there were many who helped me along the way. This is my way of giving back that may inspire others to do the same. This is my charity awareness.”

“We took my two nephews in because they ran into troubled times,” she said. “For one, music built his confidence and helped him strive for more. For the other, it saved his life. It gave him meaning and passion for life. Music opens the door to a different world for some. The Hopkinton Music Association wants to make music accessible for all.”

Curry paints and sells bells at a table on the Town Common the weekend leading up to the Boston Marathon (donating the profits to the HMA), and that has provided her with some of her favorite memories.

“Since I sell the bells at the start prior to my run — Saturday, Sunday and up to 15 minutes before I run — I have the privilege to meet friends, neighbors and runners and their families from all over the world,” she said. “Their stories, journey and generosity are inspiring.”

In terms of running, Curry said the 2012 race stands out. Temperatures reached the upper 80s, and she became very appreciative of the fans for their encouragement and assistance.

“I learned to love the race when I ran that very hot marathon and the spectators were there supporting the runners,” she said. “They were the lifeline of many of the runners. What would I have done that day without them? I have no idea. It was that year that I fell in love with the Boston Marathon.”

Kathy Curry’s fundraising page can be found at: gofundme.com/pcg99-boston-marathon. 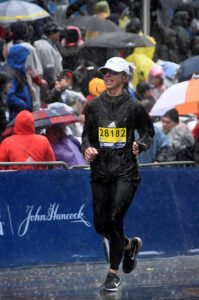 Joy Donohue, running her third Boston, is running on behalf of the Hopkinton Center for the Arts. She raised more than $10,000 for the HCA last year and was on track to surpass that amount this year, with $9,000 in commitments heading into April.

“I so admire all the work the HCA does and all those who work there,” she said. “They are top-notch professionals in areas that benefit everyone, from student to infant to adult to everyone. They bring a level of culture, art, music, history theater — you name it — that is second to none. They are always open to new and exciting ideas that make our community great. They operate purely through private donations and are not taxpayer-supported, so for all of those reasons, it is truly my extreme pleasure to support that selfless mission with my running.”

Donohue and her husband, Kim, raised two sons (Dan and Andrew) who played football and baseball and ran track at Hopkinton High School. All four Donohues attended Boston College (Andrew is a senior there).

Her children are part of the inspiration for Donohue’s marathon endeavors. Dan and Andrew will compete with her in this year’s Boston Athletic Association distance medley, which includes a 5K in April, a 10K in June and a half-marathon in October.

“I am continually inspired to run by knowing I can help others with my passion,” she said. “Also I like to think I can be a virtual role model for my own children and family so they can experience and witness in their lives firsthand the fun and challenge of setting outrageous goals and trying to achieving them and a healthy lifestyle.”

Added Donohue: “It is truly empowering and I love the concept of pushing the limits while giving back and helping others. Marathon running, for me, is an extreme way to accomplish those extreme goals.”

Joy Donohue’s fundraising page can be found at: www.crowdrise.com/joydonohue.