Hopkinton resident Stephanie Hutch recently was honored with the prestigious AFCEA International Women’s Appreciation Award, which recognizes members who have gone above and beyond to further the careers of women. The award ceremony took place in San Diego in March.

AFCEA (Armed Forces Communications and Electronics Association) International is a nonprofit association serving the military, government, industry and academia as an ethical forum for advancing professional knowledge and relationships. AFCEA has nearly 33,000 members and 140 chapters.

Hutch is the vice president of strategic planning at her family-owned company, P3I Incorporated, a Hopkinton-based defense contracting company that provides various services, such as program and project management, systems engineering and integration, and information technology to federal government agencies.

She grew up in a military family, with both her parents serving in the U.S. Marine Corps. 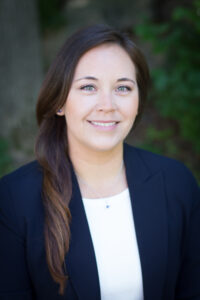 “When I was younger I wasn’t exactly sure what I wanted to do,” she said. “I grew up with a military mindset and was always drawn to service in some capacity and contracting is a great way to give back.”

AFCEA International recognized her for a number of contributions she made to the organization, including her support to the Lexington-Concord chapter, where she stood out as its women’s outreach leader, personally introducing young female professionals and entrepreneurs to the association. She also held similar roles at AFCEA International, including lead for the women outreach leaders and co-chair for Women in AFCEA.

“Being a woman in this industry, I’m in the minority. It’s important that I’m a good role model for other women and empower them. That’s always been my mission as I’ve gone through my career,” said Hutch.

She was also recognized for creating a Women in STEM (science, technology, engineering and mathematics) panel of senior female technical leaders from the Air Force, Army, industry and Boston’s innovation community that was held in collaboration with MIT Lincoln Laboratory.

“It brought in women leaders from different agencies and was the first women panel in the local chapter. It was great,” explained Hutch.

In addition, she introduced social media platforms such as Slack and LinkedIn to the local chapter in an effort to provide new career opportunities to women members.

“What Stephanie Hutch has done to create, develop and enhance opportunities for female professionals has been nothing short of phenomenal,” said Lexington-Concord chapter board chair Pat Marr.

Hutch said she feels like she found a home in the AFCEA community.

“I believe in their mission of bringing people together and hearing their ideas,” she said. “It’s very rewarding and to be given this award made me so proud.”

As a mother of two daughters, Hutch said she takes her work and professional affiliations very personally hoping to be a positive influence for the next generation of girls.

“I was very inspired by my mom who was in the Marine Corps and a very strong woman,” she said. “I want to be that same strong role model for my daughters and others.”