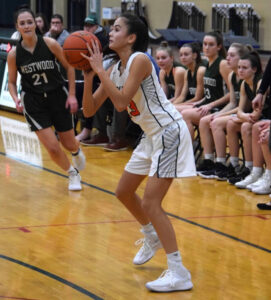 Junior Lauren Cho, shown during a game last season, is a leader for the Hillers at point guard.

The Hopkinton High girls basketball team is determined to make the most of a season shortened and disrupted by the ongoing COVID-19 pandemic. But, as the Hillers are focusing on the schedule in front of them, for much of the team there is a hope that a strong contingent of juniors will help the team peak next season when things have hopefully returned to normal.

Early this season, Lauren Cho and Kiki Fossbender have formed a considerable one-two punch to lead the Hillers on both ends of the floor.

“I think with those two players, the sky’s the limit,” coach Mike Greco said. “I think opponents will have a hard time game-planning for us. It’s easier to take one player out on an opposing team, but it’s tough to stop two players.”

Cho, the team’s point guard, has grown into her role beginning with an emergence over the second half of last season. She has come into her own as the leader of the offense, and Fossbender, the team’s top scorer through the first two weeks of the season, has been among the primary benefactors of her classmate’s play.

“I think Lauren is a great point guard and we work really well together,” Fossbender said. “I feel like she sees the court so well and creates opportunities for ourselves and our other teammates, which is great.”

Fossbender credits Cho with being a great teammate on and off the court, saying the energy she brings lifts the entire team.

“I feel like one of my strengths is getting down the court and getting into the paint and creating shots for myself and others,” Cho said. “Having Kiki ready to kick it out to is great for the team.”

Fossbender came into the season knowing she would be among the team’s top offensive weapons, but Greco stressed the need for her to work on her defense this year. The coach said that element of her game is vastly improved, and Fossbender added that her mental game is something she has focused on.

“Last year if I missed my first shot, it could ruin my entire game, so it’s something I’ve worked on,” she said. “I knew I would have to be a key offensive player.”

In addition to Cho and Fossbender, Lexy Trendel, Carly Hedstrom, Jessie Ianelli and Brooke Dougherty will be seniors next season. Most of them have played together since they were in sixth grade and developed a cohesion that has helped the program thrive. Greco said he is hopeful that at least one more member of this class will emerge as a scorer, giving the Hillers even more depth.

In the meantime, Hopkinton is tasked with navigating an unusual season. Greco said his players have easily adapted to playing in masks and dealing with the few sport-specific modifications in basketball, such as no out-of-bounds plays underneath the basket. Cho said the latter change actually is working to the team’s benefit.

“Considering we are a smaller team, I feel like the sideline out of bounds vs. baseline has really helped us because it gives us a chance to space out the paint and get downhill to the rim,” she said. “That has been one of our strengths.”

Fossbender said the biggest challenge has been playing in gyms that are empty or nearly empty.

“The lack of fans definitely makes it harder, we have to apply our own energy,” she said. “It’s hard to get as excited and get that same feeling that the gym is packed and you have a lot of fans cheering you on.”

Even as excitement builds for next season — both for a return to normalcy and a strong returning group of Hillers — Greco said there are still a number of goals to accomplish this season.

“There is no state tournament, so we are focused more on the process than we are on the end results,” he said. “We are not sure how many games we are really going to get, so the focus all along has been on working hard and improving, having fun and recognizing that this is the last go round for our seniors.

“We want to make sure we honor them with the way we play,” the coach added, “and recognize that we are fortunate to be in a town where we can play basketball.”