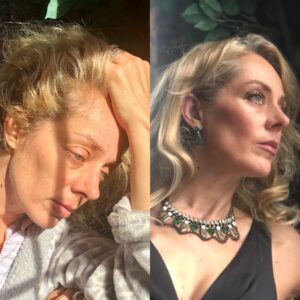 Owen Fitzpatrick’s award-winning photo collage depicts different images of his mother, Carolyn, on the same day while she was fighting cancer. The collage aims to show that people’s external image does not always reflect their inner battles. PHOTOS/OWEN FITZPATRICK

On the right, Carolyn Fitzpatrick appears to glow with health, donning dangling earrings and a striking exotic necklace.

On the left, she is clearly weary, dressed in pajamas and wearing no makeup.

But in fact, she was photographed the same day by her son Owen, a 16-year-old Hopkinton High School sophomore.

And in both photographs she is battling cancer.

The images earned Fitzpatrick a silver key for a second place finish in the Scholastic Art & Writing awards.

By taking the photographs on the same day, Owen aimed to show that looks can be deceiving.

The photos “show that everyone is fighting a battle of which we know nothing about,” Carolyn said.

Her battle officially began Nov. 2, 2019, when “out of the blue” she was diagnosed with Stage 4 metastatic colon cancer.

On that day, she said, “the world stopped.”

That day marked the start of a journey that included 24 weeks of chemotherapy, six weeks of chemo-radiation and partial removal of four major organs, including her lung.

The diagnosis was a shock, since she didn’t fit the profile of many other colon cancer patients. She runs, goes to the gym and eats healthy, she said. She is also only 46, with no known family history of the illness.

Survival rates for Stage 4 colon cancer are not promising, she said. But she put those numbers out of her mind and pressed on. “I just refused all along to believe that any of the statistics applied to me,” she said.

Her healthy lifestyle and determination paid off. “My body was able to tolerate the maximum drugs” — the same amount given to men twice her size, she said.

Owen said he never doubted his mother would defeat cancer. “I knew from the very beginning she was going to beat” this, he said. “She is one of the strongest people I have ever met and I ever will meet.”

And the woman who wore stilettos to middle school meetings and ran an image consulting business saw herself viewed through a new lens.

“I could see them look at me differently,” she said. “It’s hard to look at yourself in the mirror. One of the hardest things about cancer is you have to ignore that face in the mirror.”

Instead, she focused on a recovery she bolstered with physical exercise, including miles-long walks and workouts.

Through her challenges, she received support from her family — which also includes her husband, Andy, and her younger son, Evan, an eighth-grader at Hopkinton Middle School.

The community also stepped up, she said, providing meals and offering rides and other forms of support. “We really wanted for nothing in Hopkinton,” she said.

She wants to share her story to remind people that even apparently routine health issues, such as internal pressure and bloating, can be signs of serious illness.

“If I had read and seen more about colon cancer, I would have questioned my seemingly normal symptoms,” she said.

As of November 2020, a year after her unexpected diagnosis, she is “proud to say I am cancer-free.”

Documenting his mother’s illness is just one of Owen’s accomplishments. He writes a book review for a local publication, is the official blogger for the Hanover Theater’s Broadway series and started a company, Running UP!, which teaches young people how to run a 5K.

“We are so proud of him, especially in the face of all our family has experienced this past year,” she said.

She hopes Owen’s photos will remind people to be empathetic. “You truly don’t know what’s going on with that person who cut you off when you were driving or the person who took the carriage at Target that you were heading for.”

Not unlike her son’s winning photo, she sees life going forward as double-edged.

“I need to balance moving forward on the one hand and living with that ounce of fear on the other hand,” she said.

Still, she said, “I have every confidence that I’ve beaten this thing for good.”

← Students can be added to buses after DESE lifts capacity limits Newspaper: March 10, 2021 →