The past year has been a lesson in adaptability for nearly everyone, and Hopkinton High School junior Kate Powers is no exception. A thrower for the HHS track and field teams who has competed at the national level, Powers spent most of the offseason worried that her winter track and field season would meet the same fate as the 2020 spring campaign: canceled due to the COVID-19 pandemic.

So when it became evident that Hopkinton would be able to compete in some fashion, Powers felt a bit of relief. That is until November, when she was diagnosed with bone chips in her right elbow.

“It was just heartbreaking, but the surgery was something I needed to have done or there would be more permanent damage,” Powers said.

The operation meant Powers would not be able to compete in the shot put. At least, that’s how it seemed until she and the HHS coaching staff got a little bit creative.

“I realized I could throw lefty,” she said. “It was exciting that I was still able to do something.” 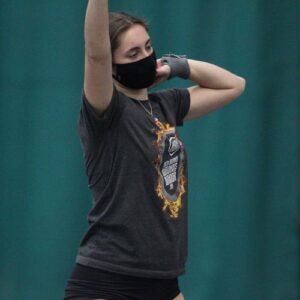 Junior Kate Powers has learned to not just compete but thrive in the shot put lefty following an injury to her dominant right arm.

HHS coaches Michael Webb and Mike Donahue discussed the idea with Powers and her father. Then there was a conversation with Powers’ doctor, who confirmed that she would not be doing any harm provided she did not throw the nearly nine-pound apparatus with her recovering right arm.

“We all thought it was a good idea,” she said.

And the results have been excellent. Powers’ best throw last year — right handed — was 32 feet, 9 1/2 inches. Throwing lefty this winter, she has eclipsed 30 feet.

“She has won every meet throwing with her non-dominant hand,” said HHS head girls coach Jean Cann. “That is pretty impressive.”

When it comes to throwing something as heavy as a shot put, it’s about a lot more than just arm and shoulder strength. Throwers have to generate momentum in a relatively small circle, either by shuffling, gliding or spinning their way into the actual throw. That means the best throwers are not just strong, they have exceptional technique. Powers had to quickly learn how to do everything in a mirror-image manner compared to what she was accustomed to doing.

“It was definitely hard to do everything the opposite way,” she said. “Coach Donahue was able to help me through all of it and walk me through my foot position and getting my hips all the way around.”

Added Powers: “I’m glad I was able to persevere through everything. My friends and family were really supportive.”

As much fun as the lefty experiment has been, Powers plans to go back to her dominant hand when the spring season rolls around.

“Shot isn’t even her best event,” Cann said. “Discus is her better event, along with the weight throw and hammer throw, where she qualified for nationals.”

Powers ultimately is hoping to continue her track and field career at the collegiate level. But for now, she’s enjoying being with her HHS teammates.

“I am just super thankful to be able to compete,” she said. “I know everyone feels the same way, you can see it every day in practice. It’s been tough, but every day you can see everyone putting in their best effort.”