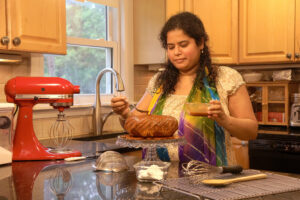 She only started baking a few years ago, but Shifalika Tangutoori admits she is a bit of a natural. She’s a scientist by trade, and the science of baking is something to which the Hopkinton resident has taken. And it became a source of comfort during the stresses of the COVID-19 pandemic.

Her skill and creativity earned Tangutoori a spot in the quarterfinals of The Greatest Baker, an international baking competition that is being held online. Out of more than 10,000 competitors, she finished in the top 1 percent — 13th in the quarterfinals.

“I must say, it’s been very unexpected, I didn’t think I would make it to the quarterfinals or even past the first round,” Tangutoori said. “It’s been enriching and it’s brought me closer to my friends and family and the community, because they voted for me every day for the past five weeks.”

Tangutoori considers herself to be a versatile baker. She tries to put a new technique into practice every time she bakes, and her submissions included an array of elegantly decorated treats. One two-tiered cake for a first birthday was decorated with different-colored frosting and butterflies. Another cake featured a farm theme, and Tangutoori topped the dessert with homemade trees, bushes, a fence and even a tractor.

While she likes baking just about any dessert one can imagine, cakes, she said, are her favorite.

“It takes a lot of effort and thought, especially when you are baking for someone you know, because there is a technical component but there is also the emotional component,” Tangutoori said. “You have to know the person and what they like and incorporate that into the cake.”

Tangutoori creates her elaborate toppings from fondant, cake lace, gum paste and frosting, all made from scratch. In addition to moving through the ranks of the competition, baking has helped her cope with the stresses of the pandemic. She gave birth to her youngest child at the onset of the crisis last year.

“It was scary at that point because we didn’t have much information about how it affects newborn babies and I felt like I needed to be present,” Tangutoori said. “The anxiety I had, I had to channel it into baking, and that helped me be more present for my kids.”

Walking through the steps of creating a perfect dessert is a form of meditation, Tangutoori said. In recent weeks, the competition has been a welcome, calming presence as she watched from afar while her native India was hit hard with a deadly virus surge.

“The anxiety was at a different level,” she said. “If something happened, I could not go there and help them. Baking came to my rescue.”

And because research and science were already passions of hers, Tangutoori said she was able to hit the ground running when it came to baking. She received a huge amount of support from friends and family, as well as the Hopkinton community and beyond when it came to voting for her to advance in the Greatest Baker competition.

Tangutoori also has been supported by her family. In addition to voting for her every day, her mother-in-law, Mary Moore, recognized her talent and gave her baking equipment. Her stepson, William, gave her a recipe book four years ago, and every recipe she has used since has gone into that book.

Brian Moore, Tangutoori’s husband, has been in her corner throughout her baking adventures. But her toddlers Oliver and Eleanor might hold the most important jobs of all.

“They are always ready to eat anything I bake,” Tangutoori said.