Tanker overturns on West Main Street near I-495 exit 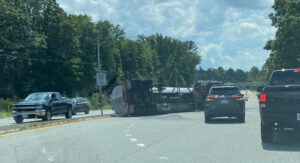 A tanker truck carrying water overturned on West Main Street on Tuesday afternoon near the Interstate 495 exit, blocking traffic in the westbound left lane. Emergency personnel responded to the scene just after 2 p.m. Multiple lanes of traffic on both sides of West Main Street were closed for much of the late afternoon.

The truck was lifted back onto its wheels around 4 p.m., but it remained on the road while work continued for at least another hour, with westbound traffic backed up for about a half-mile.

The driver was seen standing at the scene with a bandage on his arm while workers attended to the truck. Police indicated that he refused medical treatment. 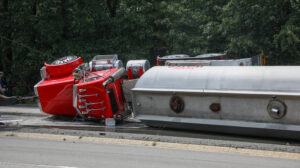 The truck rolled over just off the I-495 exit. PHOTO/JOHN CARDILLO 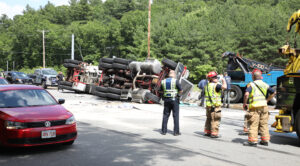 The accident forced the closure of multiple lanes of traffic. PHOTO/JOHN CARDILLO

Workers made sure the area was safe and prepared to tow the truck away. PHOTO/JOHN CARDILLO 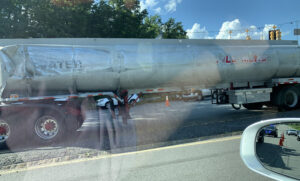 The truck was righted onto its wheels around 4 p.m. PHOTO/JOHN CARDILLO