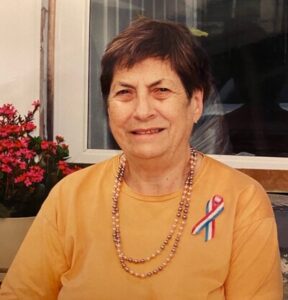 Born in Boston, raised in Newton, she was the daughter of the late Wilfred and Helen (LeBlanc) Sampson. Theresa is survived by her sister, Rita Abel of Portland, Maine. She is predeceased by her brothers, Wilfred, Herman and James Sampson.

Theresa was the loving wife of the late Walter S. Jasset Jr., who passed away in November 1990, her true love for 39 beautiful years.

She graduated from Newton North High School and upon graduation worked at Newton City Hall. She met the love of her life, Walter, on a double date set up by her cousin on Christmas Eve. They married and started their family in Newton and then moved to raise their growing family in Framingham, among many wonderful neighbors and friends.

Theresa was a homemaker and volunteered at St. Patrick’s Manor in Framingham for over 20 years. Her Catholic faith was an important part of her life. She found pleasure in hosting holiday gatherings, preparing Sunday dinners, sewing, ceramics, singing in the choir and playing card games. She loved spending time at their second home in Saco, Maine, where she enjoyed the ocean, taking drives and cool breezes sitting on her front porch. This was the gathering spot where her children and grandchildren would talk for hours, laugh and listen to stories about the good old days. It was common to find extended family and friends visiting for a weekend or weeks on end.

Theresa was the beloved mother of five children, Lois Abramo and husband Salvatore of Norfolk, Peter Jasset of Framingham, Beverly Jasset of Hopkinton, Jane Clark of Framingham, and Ellen Merrill of Sudbury. She was an adoring Nana to her five grandchildren, Jessica Tripp and husband Everett, Victoria Abramo, Elizabeth Abramo, Noah Merrill and Walter Simon Merrill. She also is survived by many nieces and nephews, and grandnieces and grandnephews.

Relatives and friends are kindly invited to attend a time of visitation on Friday, Jan. 7, from 10-11 a.m. at the Norton Funeral Home, 53 Beech Street (corner of Union Avenue) in Framingham. A funeral Mass will be celebrated at noon in Our Lady Help of Christians Parish, 573 Washington Street, Newton. Burial will follow at Newton Cemetery. At the request of her family, face masks are required. Services are under the care of the Norton Funeral Home, Framingham.

In lieu of flowers, expressions of sympathy in her name may be made to the American Diabetes Association (diabetes.org).