This HHS senior’s plans are up in the air 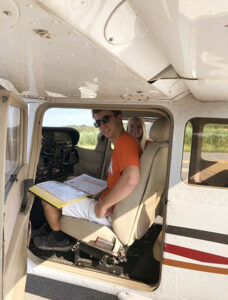 A Hopkinton High School senior has his sights set on the sky as he gets one step closer to fulfilling this lifelong dream of becoming an airline pilot.

Jack Breslin has always loved aviation, but it took a miracle for him to turn that love into a life’s ambition.

That miracle was the one that saved 155 people who, in 2009, were on board US Airways Flight 1549 that struck a flock of Canada geese and lost all engine power. Unable to reach any airport, pilot Chelsey Sullenberger (a.k.a. Captain Sully), safely glided the plane into the Hudson River off Midtown Manhattan, turning a potential tragedy into a story that dreams are made of.

“I remember sitting there watching all of the videos of what happened and remembering how amazing [Sullenberger] was to handle that emergency,” said Breslin, who was 8 years old at the time.

As soon as he was able, Breslin started taking flying lessons. After the first one, he was hooked.

For the next year and a half, Breslin took lessons up to three times per week out of Norwood Airport in order to get enough hours in the cockpit to learn how to take off, fly and safely land a single-engine plane.

Before he could get his license, Breslin had to be able to fly solo around the airport and fly a 50-mile “cross-country” route on his own.

All the time and miles put into flying added up, as Breslin earned his private pilot license a few months ago, the first step to achieving his dream of becoming a commercial airline pilot. 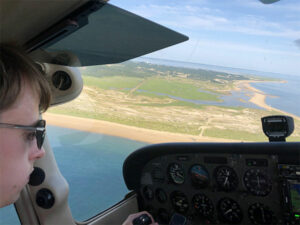 Jack Breslin has spent many hours learning how to take off, fly and safely land a single-engine plane.

Although for most of his journey to getting his license was smooth, Breslin said there was a little turbulence along the way.

“Last month we had a radio failure and we couldn’t connect with traffic control or make ourselves known that we were going to be landing,” said Breslin, who called the experience “fun” after he and his co-pilot landed without issue. “Hopefully this won’t happen again, but it was a learning experience.”

When he is not flying planes a few days per week to get in the necessary hours needed to get to the next step in his license, Breslin is working at T.F. Green Airport in Warwick, Rhode Island, cleaning airplanes and greeting customers.

“The more I am around airplanes the more I can learn and the better pilot I can be,” he said.

Breslin also is a volunteer for Pilots N Paws, an organization that provides transportation services for shelter animals who are in danger of being euthanized because of overcrowding and have a chance for adoption in another state.

The senior also is in the middle of applying to colleges, preferably, he said, where the weather is conducive to year-round flying. As a commercial airline pilot needs to have a bachelor’s degree as well as numerous hours in the air, Breslin plans to major in business or Spanish in order to broaden his horizons.

“I would love to be able to fly for an airline in Spain or South America someday,” he said.

Although Breslin still has a way to go before you will see him captaining your next international flight, for this young man from Hopkinton, the sky’s the limit.