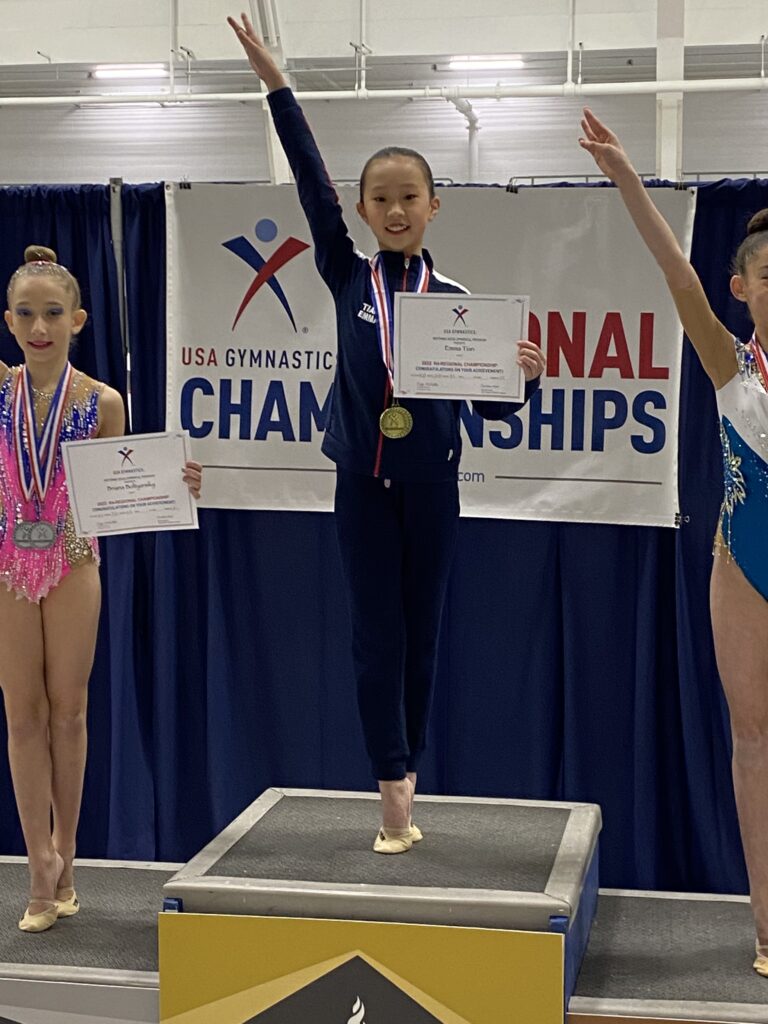 Rhythmic gymnast Emma Tian, shown after winning an event at a regional meet, went on to compete in a national competition earlier this month.

When Emma Tian was just 4 years old, her mother tried to find an activity for her. Tian, now 11, tried rhythmic gymnastics, and she has risen up the ranks to earn a spot at her first national meet this month.

The competition, which took place from June 1-5, took Tian back to Wisconsin, a state where she lived for the first few years of her life.

“It was exciting to visit again and exciting to take part in nationals,” said Tian, who just finished her fifth-grade year at Hopkins School. “When my mom found gymnastics, I got really excited and I liked it a lot so I kept doing it.”

American gymnasts are divided into categories ranging from 1-10, with the first three ranks reserved for beginners and the latter categories for more advanced athletes. In rhythmic gymnastics, athletes perform a floor routine with a type of apparatus, including a hoop, a ball, clubs, ribbon or rope.

Tian is Level 6, among the advanced groups, and has excelled in several events. She was able to place in both the rope and ribbon events at nationals (second in rope and sixth in ribbon), and placed in every one of her apparatuses at the regional competition (first in floor and rope, second for all-around and fourth in hoop and ribbon).

“I was really happy with my performance,” Tian said, adding that clubs and ribbon are her favorite events.

One of Tian’s routines might only last 90 seconds to two minutes, but there are a large number of elements on which she is judged in that short amount of time. Gymnasts are given points based on how difficult their routine might be and are scored on doing jumps, balances and turns while twirling and tossing the apparatus at hand.

There also are dance steps and other moves, and every twist and turn is scrutinized by the judges, including an athlete’s rhythm, expression and musicality.

“Sometimes you can get deductions for very little things,” Tian said.

Tian said she loves the camaraderie associated with the sport, including getting the chance to meet gymnasts from other parts of the country and learning what they enjoy about the sport. She said she made some friends during her time at nationals.

She also credits her coach, Yulia Kisseleva of Elite Training Center in Needham.

“[Kisseleva] has been training me since I was little and I have trained here my whole career in gymnastics,” Tian shared. “It would not be the same days as right now without her.”

The national competition brought the season to a close. It will start up again in January with new routines and different apparatuses, Tian said. In the meantime, Tian said she will be spending time dancing ballet and playing the piano. She’s also looking forward to a trip to Six Flags and the Hershey chocolate factory. The twists of being a gymnast mean she has no fear when it comes to riding a roller coaster.

And, despite the high stakes and the margin for error, Tian said she was not overly nervous when stepping onto the national stage for the first time. She also can’t wait to get back.

“I want to qualify for nationals again next year and the year after that, too,” she said, “and then get higher scores than I did this year.”