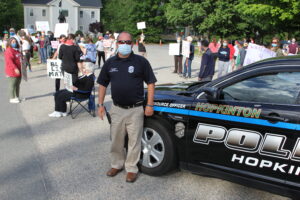 Officer Phil Powers, shown working at a recent social justice rally at the Town Common, not only has dealt with unemployment fraud questions from residents, he has dealt with it personally. PHOTO/JOHN CARDILLO

When Hopkinton Police Officer Phil Powers opened his mail and saw that he had a letter confirming his unemployment filing, he knew something was amiss. He had not been laid off from the Police Department and therefore had not filed an unemployment claim.

His is one of dozens of letters that have been sent to Hopkinton residents recently by an apparent fraudster seeking to capitalize on an unemployment system that has been overwhelmed during the COVID-19 pandemic.

“It’s fraud, it’s someone taking advantage of the situation,” Powers said. “I think they are getting so many claims and so many cases that they are not always confirming with the employees.”

The mailing is little more than a form letter indicating how much money a recipient is purportedly going to get per month as a result of his or her claim.

Massachusetts Attorney General Maura Healey said last month that her office had received nearly 300 calls from state residents claiming to have been targeted by unemployment fraud scams since the pandemic began. According to Healey’s office, the fraudsters are filing false claims through state unemployment agencies nationwide, including the Massachusetts Department of Unemployment Assistance (DUA).

“We are working with our state and federal partners to determine the sources of these fraudulent claims and take appropriate action,” Healey said in a statement. “In the meantime, if you encounter one of these scams, stay alert, stay calm and report this fraud.”

Powers said he did not fill out an incident report but noted residents can choose to let the police know so the complaint is on record. Because of the widespread nature of the fraud, it should be investigated at the state and federal level, he added.

“If people do report it to us we will give them an incident number so, down the road if something happens, they can say they did report it to the police,” Powers said, urging people to report the fraudulent claim letters to the DUA.

Once it is reported to state authorities, they can take the ball on investigating it, Powers said. Healey recommends that victims report the fraud to credit card companies, banks and other financial institutions where they do business. Individuals also should take steps to secure accounts, change passwords, check credit reports and make a record of the fraud, Healey said.

The DUA has implemented additional security measures due to the uptick in reports of these scams.

“Protecting the integrity of the unemployment system and ensuring benefits are going only to valid claimants is the top priority of the Department of Unemployment Assistance,” said Rosalin Acosta, secretary of labor and workforce development. “We are working rapidly to respond to this scheme and urge individuals who may have had a false unemployment claim filed in their name to contact the department.”

Jobless claims have been coming nationwide on an unprecedented scale. An additional 1.5 million people filed for unemployment insurance the week of June 15, which marked 13 straight weeks of having more than 1 million people file for unemployment for the first time. The previous one-week record for jobless claims came back in 1982 and was 695,000.