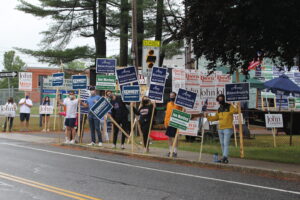 Candidates and their supporters were out in force outside Hopkinton Middle School despite the inclement weather Monday. PHOTO/JOHN CARDILLO

Amy Ritterbusch defeated John Coutinho to earn a spot on the Select Board in voting held Monday at Hopkinton Middle School. According to results — which won’t be confirmed as official until later in the week — Ritterbusch finished with 1,595 votes to Coutinho’s 933.

Coutinho, who had been vice chair of the board, lost his seat after a campaign that featured his accusations of social media attacks by his opponent’s supporters. Coutinho, former chair of the Hopkinton Republican Town Committee, took heat in online chats primarily for being a supporter of President Donald Trump.

It was a good night for Democrats overall, as Joe Markey and Lya Batlle-Rafferty won the two open seats on the School Committee. They beat out Republican Dawn Ronan for the seats being vacated by Meena Bharath and Jen Devlin. Markey finished with 1,826 votes, Batlle-Rafferty amassed 1,565 and Ronan garnered 1,077.

In an interview with the Independent just after the results were announced, Ritterbusch said she was cautiously optimistic about her chances heading into Monday.

“I was feeling generally pretty good, but I didn’t know because Coutinho had made a big issue of the negative campaigning and I wasn’t sure how that would play out with voters,” she said. “But I generally had a good feeling.”

Ritterbusch said one of her primary goals will be to improve “communication and transparency — making sure the public understands, like the financial situation we’re in due to COVID and if we have to delay things or cut things that they understand what our choices are. I want to make sure we’re communicating that to the public so they’re not surprised.”

Coutinho, a tireless volunteer who is a frequent presence at events in town, texted that he takes pride in having helped to make Hopkinton the desirable community it has become.

“It has been my honor to serve the town over the last two decades on numerous boards and committees,” he wrote. “Over that period Hopkinton has become one of the premier towns to live and work in Massachusetts. I am enormously proud of the achievements we have accomplished together. It is imperative that the new leadership team protect our wonderful community during these stressful economic times. I’m certain the residents of Hopkinton will expect nothing less.”

The School Committee candidates dealt with some issues as well, but they kept things civil between each other.

“I feel really good about the election, because each of the School Committee candidates stayed very focused on the issues and represented their views well,” said Markey, the top vote-getter. “I congratulate Lya, and while Dawn Ronan didn’t win a seat I know that she will continue to stay very engaged, and I invite and welcome that.”

Added Markey: “It’s good to know that the community is paying attention, that people like Amy and I who have been working in different capacities over the past 15 years kind of quietly moving the ball forward for the town have developed apparently the trust of the community, and that’s quite a responsibility. I’m looking forward to working hard on the School Committee. We have an awful lot of work ahead of us.”

Results were released Monday night by Connor Degan, the town clerk, who indicated there “might be a couple dozen” ballots not yet finalized. Degan noted that the turnout was impressive for an election with no ballot questions in the middle of a pandemic — 2,543 votes counted as of Monday night. For detailed results, click here.

In the uncontested races, the following candidates were elected:

Voting took place at Hopkinton Middle School, and Degan said there was a “steady stream” of voters despite a thunderstorm that brought heavy rains in the late morning. Degan said about 1,300 residents requested mail-in ballots.

There were 12,540 residents registered and eligible to vote in this election. Of those, 7,511 are unenrolled, 2,903 are Democrats and 1,964 are Republicans. There are 55 members of the United Independent Party and 53 Libertarians. There are 10 other party affiliations, but none has more than 18 members. Of note, there are two members of the Pirate Party and one member of the Pizza Party (yes, really).

Some might have noticed that the ballot reads “Board of Selectmen” rather than “Select Board,” which is the new name the town voted last year to call the primary board in town. According to Degan, while there was a bylaw change voted upon at 2019 Town Meeting, there would need to be a change to the town charter for it to be reflected on the ballot. The next charter review is not until 2027 (10 years after the last one). There is a process where the name could be changed earlier, but it would require a Town Meeting and ballot vote, and Degan noted the process would require time and money.