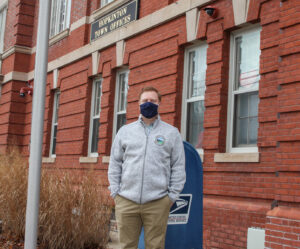 Anyone who has watched a Planning Board or Zoning Advisory Committee meeting likely is familiar with John Gelcich, who has been Hopkinton’s principal planner since April of 2019. During those meetings Gelcich is the go-to person for information and advice.

Gelcich previously was a senior planner for Beals and Thomas, a civil engineering firm in Southborough. Prior to that he worked for a few private and public organizations.

A native of Connecticut, Gelcich went to college at Virginia Tech for both his undergraduate and graduate degrees. He lives in Westborough and sits on his town’s Master Plan Advisory Committee and Open Space Preservation Committee, and he formerly was on the Zoning Board of Appeals.

Hopkinton Independent: When did you develop an interest in becoming a principal planner?

John Gelcich: “During college. My bachelor’s was science focused — wildlife science — but it was more general in terms of habitat science. So I’ve always been interested in environmental-type stuff. Taking those courses that were associated with that, I ended up taking environmental policy and urban planning classes and that introduced me to the field and really piqued my interest. I ended up going to grad school for [urban and regional planning].”

HI: How did you end up in Hopkinton?

JG: “My first job out of college was my internship in college, near where I grew up. Then during the downturn in 2008, 2010, they downsized and I ended up losing my job. So my wife and I decided to relocate. We decided to move up to Massachusetts; I always wanted to live here. So I’ve been working in Massachusetts since then, kind of bouncing around. I live next door in Westborough, so Hopkinton was kind of the perfect opportunity to get back into the public sector. I was familiar with Hopkinton at that point and it seemed like a great opportunity.”

HI: You serve on some town boards in Westborough. Does that help you better do your job in Hopkinton, where you sit in on meetings and advise similar boards?

JG: “In Westborough it’s not quite the same. The boards in certain situations are kind of more independent. There is the staff person that we can reach out to, but they don’t generally attend meetings all the time. But that’s not true for all the boards. … So it’s similar but it’s not quite the same. But it definitely does help. The experience does help on both sides — being the principal planner in Hopkinton helps my efforts in Westborough, and my efforts in Westborough give me a good perspective for my responsibilities in Hopkinton.”

HI: What are your primary responsibilities?

“The other things that I do are the long-range planning-type things. The master plan was done in 2017 so obviously I didn’t have a hand in that, but the implementation of the master plan is something I assist with. Open space and recreation plans are something that the town does on a five-year or seven-year rotating timeline, and that’s coming up soon. … If the town wanted to undertake any kind of themed or neighborhood plans those would be something I would do as well. And then also, on top of that, we’re trying to expand the GIS [geographic information system] capabilities, which is [highly detailed] mapping in town, and I have a hand in that as well.”

HI: How much input do you have on decisions made by the Planning Board?

JG: “I am involved in the discussions and I try to set myself up as a resource rather than somebody who’s kind of involved in the decision-making process. … It’s not for me to decide what people in Hopkinton want to do. That’s Town Meeting’s responsibility. So I will advise the board or the committee on what’s allowed, either by the bylaws or state regulations. I will do some research as to what’s being done elsewhere, whether it’s in Massachusetts or somewhere else in the country. I will try to provide some technical information. I’m hopefully going to be doing a map that will show developable land in Hopkinton, which helps inform both boards to make a better decision. So that’s kind of how I position myself. And I think ZAC uses me in that way, they’ll use me more as an adviser than a decision-maker. … I really try to encourage the board members to make the decision, because it’s their responsibility and it’s what they’re on the board for — both on the Planning Board and ZAC.”