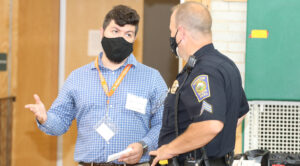 Editor’s note: This story is part of an occasional series focusing on town employees.

Connor Degan has spent most of his life in Hopkinton, attending the public schools and graduating from Hopkinton High School. He graduated from Roger Williams University in 2014 with a bachelor’s degree in political science.

“Even when I was in school, I was involved in a number of campaigns and used the knowledge of my major to help people run for office, particularly at the state level,” he said.

He decided to take a step back from this aspect of government around 2016 because “we started to see a real uptick in extreme partisanship.”

“That wasn’t part of my career goal,” Degan explained. “I really wanted to help people in some more direct manner.”

Hopkinton Independent: How did you come into your current position?

Connor Degan: “I heard from a neighbor that Geri Holland, my predecessor, was looking for some help in the office back in 2015. She didn’t have any money in the budget, so I decided to volunteer to learn more about local government. I worked with her from March to November, when she announced that she would be retiring in December. I decided to go for it after receiving support from my family and people in the community. At the time, I was also serving on the Housing Authority, where I was elected as a write-in candidate. I’ve always had a passion for history and government, so the town clerk position was a perfect fit for me.”

HI: What inspired you to become interested in government?

Degan: “I have to give credit to my parents. I remember when I was young, watching my first Select Board meeting on HCAM. My mother had gone to talk about street names because they were considering renaming the street that we lived on. My mother was saying that we shouldn’t erase the history of the street, so the Select Board came up with a compromise. Also, when I was in high school there was a local government project. We had to go and research a local town board, committee or official. By the luck of the draw, I got the Select Board, so I went to a meeting and wrote a report on it. I would like to say that those two experiences are what got me interested in the nuts and bolts and gears of government.”

HI: What are some of your responsibilities as town clerk?

Degan: “Some people like to colloquially say that the town clerk is the face of Town Hall. I like to think I am the point-of-contact person for the community, because I am the only person who works full-time at Town Hall who’s also an elected official. I might not always have the answer for you, but I always know the person you can talk to. I like to focus on the customer service aspect. Others think that all we do is issue dog licenses, but the job encompasses so much more than that. I help people in their brightest and darkest moments, from issuing birth and marriage and death certificates. It’s a way to make someone’s day a little better and make my job even more fulfilling. We get people from start to finish and everywhere in between in their lives. The job also encompasses running elections, voter registration, permitting for utility poles and all types of registrations, among other duties.”

HI: What has been your biggest accomplishment in office?

Degan: “I would have to say one thing I am particularly proud of has been the implementation of election reforms as chief election official of the town. We had very dated equipment that wasn’t even produced anymore, so we had to rely on other towns to turn in their old equipment to get the spare parts. But 2016 was a great way to pivot into the federal government’s push that election equipment was deemed critical infrastructure and needed to be entirely foolproof and not able to be tampered with. They have an extremely low margin of error and do a fantastic job. We had to do a lot of additional training with election officials to make sure that it came out effectively. Another thing I have been trying to do is digitize more records and make them more accessible. We have so many really ancient records in the Town Hall that so many people don’t get to see. Since I’ve started, we’ve probably spent about $75,000 just restoring old records. It’s part of the role of the Town Clerk as a town historian to make sure that those are there for generations to come and will impact people long after I’m gone. I’ve also worked really hard to encourage young people to vote through early voter registration efforts.”

HI: What was your biggest challenge?

Degan: “Within a week of my coming into office, we received a recount petition. I very quickly had to read up on all the recount procedures and laws and contact people on other towns’ boards of registrars. On our Board of Registrars at that time one person had resigned and another had been an election worker. That left it with me and one other person, so I had to go to the Select Board to get them to appoint a Republican as a temporary member because I am an independent and the other member was a Democrat. If there had been a tie, it would have to go to the courts. We were lucky that the recount was dead on. But there were a lot of letters to the editor about that. But I always thought you learn more from the adversity phase. The 2020 election was another challenge because of the pandemic and the push — for good reason — for early voting. We had a whole bunch of election workers wearing masks and social distancing trying to stuff envelopes with ballots. My assistant and I were probably working 80 hours a week from last August through November. But both of us feel that we were just so glad that people could vote, and about 6,000 or 7,000 voted by mail.”

HI: What are your favorite aspects of your job?

Degan: “I’m also a justice of the peace, so I get to perform marriage ceremonies. I love doing them. I also enjoy serving as the clerk at Town Meeting. I just love the concept that if you’re a voter in town, you get to be a legislator for the day. The thing I really love about the job is that it’s never the same day twice. It forces me to think critically and to keep in mind all of the various regulations. I am always busy with something interesting. I’m fortunate to live in a community that is so supportive of me personally and of the office. I grew up here, and I like to think of all my constituents as my neighbors. I’m really lucky to serve people who are so dedicated to their community.”