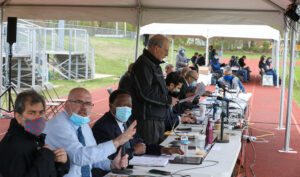 Saturday’s Town Meeting was an amicable affair, with only one article on the schools having any debate during the morning hours.

But the process was nearly halted when the quorum was called into question by developer Ron Nation at noon, as there were only 101 voters present of the necessary 117 when Articles 35 and 36 on amending the solar bylaw and the creation of a solar overlay district were about to be debated.

Town moderator Tom Garabedian called for a half-hour recess and encouraged voters to turn out to the tent at Hopkinton High School so that the session would not have to reconvene the following Saturday.

“What I’m imploring townspeople to do is to come to the football field and check in so we can reach a quorum and finalize the meeting,” he said.

A half-hour later the count was up to 136. And it was a good thing the additional residents appeared, because most of the debate occurred near the end of the meeting, which ended around 2:15 p.m. It started at 9:30 a.m. — 30 minutes late because there was no quorum until then.

One article discussed at length was Article 37, which considered rubbish disposal for garden style apartments and village style condominiums in residential districts. It failed, getting only 12 supporters vs. 94 opposed, with a two-thirds majority required for passage.

“I’m here to talk trash,” said Garabedian, temporarily stepping down from his capacity as moderator in order to bring forth the article. Assistant town moderator Muriel Kramer served in his place. 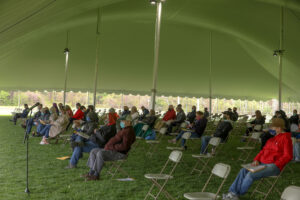 “As a resident within a condominium complex having been in a single-family home prior to moving in, I don’t believe that it is appropriate that the provision of waste management and recycling should be within the zoning bylaw,” Garabedian said. “This change, if Article 37 as amended is adopted, would leave it to the town [Select Board or DPW] to determine if garden apartments in residential districts or village housing in residential districts could be allowed to have town-provided waste management and recycling services.”

Select Board member Mary Jo LaFreniere, speaking as a resident, opposed the article, explaining that she lives in a condominium complex and that this type of measure has been voted down in previous Town Meetings.

“Most of these streets in garden apartments and condominium complexes are not accepted town streets,” she said.

Mary Larson-Marlowe, who serves on the Planning Board and the Zoning Advisory Committee, explained that only new developments of this type would be affected by the article.

The bylaw would remove the prohibition of trash collection, not compel the town to collect trash.

“Most of the projects we’re talking about — the village apartments and the condominiums — all have the same thing in common, and it’s the density,” he said. “When they were initially approved, this was part of the deal. … I can’t accept that as a public citizen that I’m going to pay for pickup of somebody’s trash that they already agreed that they are going to take care of.” 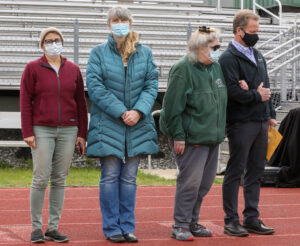 At the start of Town Meeting, three local media outlets — the Independent, HopNews and eHop — were acknowledged for contributions to the town. On hand were (from left) eHop representatives Charusmitha Ram and Nanda Barker-Hook, Independent founder Sarah Duckett and Independent publisher David Bagdon. PHOTO/JOHN CARDILLO

Another article late in the nearly five-hour meeting that was briefly discussed was Article 40. It dealt with keeping leaves, branches and natural materials off of streets and sidewalks. Previously, only snow was outlined. Residents brought up people who used leaf blowers and sump pumps to push leaves and water, respectively, onto the sidewalks and streets.

Earlier in the day, financial matters dominated the flow of conversation. But there was no debate or opposition to these articles.

In the Special Town Meeting, which was held at the start of Annual Town Meeting, two articles were considered. The first was a means-tested senior citizens tax exemption, which was a reauthorization of a previous policy that extended it for a period of three years.

The second was the funding of a feasibility study for the potential replacement of Elmwood School, and it passed by a 105-1 vote. The $1 million appropriation was necessary as the school is under consideration for review by the Massachusetts School Building Authority (MSBA) for eligibility for a feasibility study for a possible future new school.

In Annual Town Meeting, the town passed its FY22 operating budget. Appropriation Committee chair Michael Manning presented the news that the budget will be balanced with opportunities for some increases in school staff and infrastructure improvements.

“One of the town’s core financial principles is to budget in a cautious and prudent way,” Manning said. He noted the challenges of preparing a budget during the uncertainty of the COVID-19 pandemic with unsure revenue flow and local aid.

“Fortunately key developments have made a draw on the town stabilization fund and the school stabilization fund unnecessary,” he explained, noting there will be an 11.6 percent increase in state aid. The town also will receive more than $5 million in federal aid, he said.

The schools will see an increase of 18.6 new positions at a first-year cost of about $959,000, he said. A counselor has been added to the Youth and Family Services Department, and a half-time driver was added for the Senior Center. One new police patrol officer will be funded through a host community agreement via the Legacy Farms development. The average tax impact will be 2.86 percent if all four capital debt exclusion projects are voted favorably at Town Election on May 22.

Manning added that residential property values rose from $2.7 billion to $4.5 billion from 2011 to 2021, a 65 percent increase. He attributed this to the increase in new construction as well as the value of existing property.

Another item of note that passed was Article 29. It removed car washes as an allowed use in the downtown business district. While it required a two-thirds vote for passage, it received a unanimous vote.