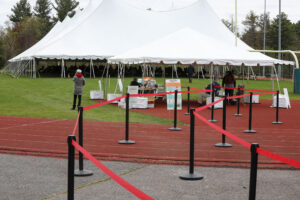 The turnout for Saturday’s Town Meeting was not very high, but those who did attend kept things moving. The solar-related articles elicited the most discussion. PHOTO/JOHN CARDILLO

Town Meeting shed some light on how it wants to pursue its solar energy policy, voting 126-14 to approve restrictions on commercial solar photovoltaic installations.

However, there was not enough support for a proposed commercial solar photovoltaic overlay district proposed by the Planning Board, with some voters expressing concern that it could be challenged in court because there was no case law setting precedent on its governance. The article got 82 yes votes vs. 59 against, but a two-thirds majority was required for passage.

Planning Board chair Gary Trendel explained both articles, noting that Hopkinton currently has about 19 acres of commercial ground-mounted solar. There are 45 acres more that have been approved but not yet built in this growing industry.

“In my experience on the Planning Board these projects are the most challenging to review, as they have substantial impacts, often in residential areas,” he said. “And yet they receive a very high level of advocacy from the Commonwealth of Massachusetts.”

He noted that the state does not allow cities and towns to prohibit or “unreasonably regulate” solar arrays.

Trendel made a point to clarify that these articles do not regulate solar energy as an accessory use, such as panels on homes or over parking lots.

Article 35, the solar farm restrictions, is designed to strengthen the existing bylaw by regulating the visual impact of ground-mounted solar arrays. The article would require a site plan review for all commercial solar projects rather than obtaining a special permit. Year-round visual shielding for the life of the project is another component that would be required, including fencing that is friendly to wildlife.

Trails that are altered would have to be relocated within the same parcel, according to the article. Stipulations for sight line analysis, glare analysis and noise analysis are included, as well as pollinator friendly landscaping and bonding to support maintenance.

Article 36 was more controversial in that it created a solar overlay district that determines on which parcels commercial solar arrays can be installed. It is comprised primarily of parcels that already have commercial solar installations built on them, with the addition of the Interstate 495 corridor and the E.L. Harvey property, which is not forested.

He added that, while the Attorney General’s Office would be likely to approve the solar overlay district, it could be challenged in court.

Resident Steve Hopkins said he thought Article 35 was “quite onerous and overkill for what it does,” citing the noise analysis as a point of contention.

“Part of it has to do with the clearcutting that is associated with this,” Trendel replied. “There could be some changes in noise thresholds.”

Fran DeYoung said the measure provides some standards for the board to review. A Planning Board member, he spoke as a private citizen on the matter.

Resident Jeff Doherty said this measure was “overkill.” He added that he was “in support of the general concept,” but thought that the article needed more work.

“If the first one didn’t say Hopkinton is against solar expansion, this one certainly does,” said Steven Popkes in opposition.

“I look at a solar field and I get excited,” he continued. “I don’t see any aesthetic problem whatsoever. To me that is another school we don’t have to build.”

“If we adopt this, we’re asking for a lawsuit,” added Ken Weismantel, “because anyone that wants to build it is going to have to sue us to do it.”

He added that I-495 is state property, so Hopkinton’s permission is not required.

Doherty, who lives in an agricultural district, said that this article would take away his property rights and “is exclusionary and is segregation.”

“It does not take an individual’s opportunity to have solar,” Eric Sonnet said in support of the article. “It just makes the town part of the process by forcing a Town Meeting vote to be included so the property can be included in the overlay map. If it’s good enough for Weston and Wellesley, why isn’t it good enough for us?”

In the end, it was not quite good enough to capture the two-thirds of the votes necessary to pass.