Town Meeting to address potential future use of Center School 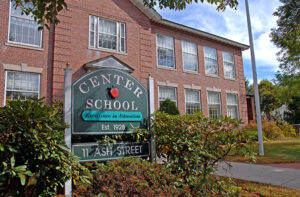 The town has expressed support for keeping Center School for municipal and recreational use.
FILE PHOTO/STEVE McGRATH

Town Meeting voters this spring may be asked to bring in design consultants to help shape the future of Center School.

The consultants would be asked to present a feasibility study to determine options to convert the school to municipal use.

Several potential consultants already have responded to requests for quotes for the project, Town Manager Norman Khumalo said in a recent interview.

Khumalo also brought up Center School during his regular report to the Select Board at its Dec. 17 meeting.

“We issued an RFP [request for proposal] about three months back,” he told the board. “There were multiple inquiries, however, no one submitted a proposal. We reissued the RFP and I think we have six solid submissions that the Permanent Building Committee will be reviewing shortly. Based on the outcome of that process we may be requesting a $15 million project for the Center School. However, all of this is subject to the Select Board’s approval.”

Select Board member Brian Herr suggested the reference to a potential $15 million project was “a little bit presumptuous,” considering the board had not yet discussed whether the building should be renovated or sold.

“This board, I don’t recall us ever making the determination that it’s going to remain a public building,” Herr said. “I think we have to determine if we’re going to hold the asset or if we’re going to sell the asset before we go out and say let’s get $15 million to cover the asset for public use.”

Khumalo responded that “the charge to establish the actual value of the building is not part of this process.”

Said Khumalo: “The RFP specifically asks the proponents to consider the future of Center School and the options that could be established, including but not limited to potential municipal use, housing, mixed use, developing part or all of the current buildings as well as demolishing all or part of the building, and to propose only options with realistic possibilities for implementation that will also benefit the town economically.”

This study should include “a professional study of the building and grounds of Center School” and provide the Select Board and residents with “more detailed options for the building’s future use and the costs associated with those options,” according to the request for bid.

While the Select Board voiced support for keeping the building during an informal discussion, Herr said it’s important that the town does due diligence and determines the property’s potential market value.

“If we don’t answer it here, it’s going to be asked at Town Meeting, for sure,” Herr said. “Someone’s going to to go to the microphone and say, ‘Why are we even keeping this thing? What is it worth?’ We need to have that answer.”

In its final report, the team recommended that the Center School buildings and grounds “remain in municipal use.”

The building is located in a residential zoning district, which prevents converting the building to commercial retail or office space.

Any future use must “respect the surrounding neighborhood,” the report stated.

Municipal government needs more space for town departments, the report noted. The School Department and the Parks and Recreation Department have rented space at the former school.

Town Hall functions that require additional space or could benefit from town and school include record storage as well as usage by information technology, Youth and Family Services, finance, and human resources, according to the report.

The building also could house meeting rooms for committees and civic organizations; a Life Skills Program for 18-22-year-olds that currently occupies two high school classrooms; and “needed town services” such as a youth/community center and a recreation gym and Upper Charles Trail connection, the report said.

The building will require “major renovation to serve the Town’s future needs,” the report stated. About $900,000 needs to be spent in hazardous materials removal and remediation, and the facade facing the Town Common will require historical preservation.

The original 1928 building requires a full “gut” renovation and new electrical, data, security and mechanical/HVAC systems for it to function as offices, the team wrote. The 1950s section requires major modifications and renovations for reuse.

At the time of the report, the gym was described as “in relatively good shape” and it was in use daily, primarily for youth basketball and other sports and programs. 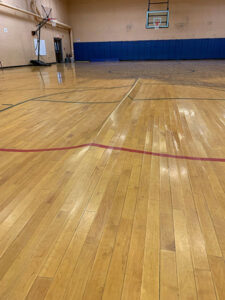 The gym floor at Center School buckled and split in late December and is no longer usable for youth basketball and other activities.
PHOTO/JERRY SPAR

However, in late December the gym was deemed “unfit” because of a rise in the floor that started developing a month earlier.

A flooring company representative said the issue likely was caused because the floor became oversaturated with water and buckled, said Jay Guelfi, director of Hopkinton Parks and Recreation.

“The middle of the gym looks like a big bubble,” he noted.

Recreation events have been moved to other locations or canceled.