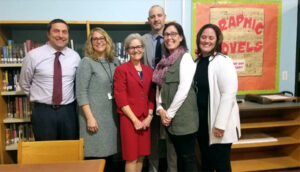 Cathy MacLeod (middle, surrounded by the principals of Hopkinton schools in 2018) lost her battle with cancer early this month.
PHOTO/HCAM

Former superintendent of Hopkinton Public Schools Dr. Cathy MacLeod is being fondly remembered after she passed away early this month following a long battle with cancer.

MacLeod served as superintendent in Hopkinton for five years, from July 2013 until her official retirement in June 2018. Although she took a leave of absence in February 2018 to focus on her health, she continued to be actively involved in several ongoing projects at the time, including the opening of the Marathon Elementary School. She had moved to Vermont after her retirement.

Current Superintendent Dr. Carol Cavanaugh, who took over for MacLeod after working alongside her as assistant superintendent, broke the news to the school community on Nov. 4.

“It is with a heavy heart that I share that former Superintendent, Dr. Cathy MacLeod, lost her battle with cancer this past weekend,” Cavanaugh wrote in an email to families. “I would like to say she focused her life’s work on education, but it would be more apt to say she devoted her work to children. All children. Her energy was boundless, and she carried out her role with intellect and grace.”

The news of her passing hit the Hopkinton School community hard.

“She was a kind, compassionate, and empathetic person,” said HHS principal Evan Bishop, who had worked with Bishop during her five years with the district, in an interview with the Independent. “She had a clear vision for the district and did a great job bringing together the administrative team to work as one district as opposed to separate schools.”

There were a number of district accomplishments that could be credited to MacLeod’s supervision, including moving to full-day kindergarten and the construction of the Marathon Elementary School. But it was her work with people, Bishop said, that will be her legacy in the Hopkinton Public Schools.

“Dr. MacLeod was a tremendous leader, mentor and friend,” he said.

“One of her biggest contributions was in making excellent hires for the next level of leadership for our district — the benefits of which we will continue to reap for years to come,” commented School Committee chair Meena Bharath, who worked with MacLeod during her first year on the board.

Although MacLeod had been fighting cancer for some time, her death came as a shock for many.

“She had a certain grit and grace about her that made it seem as if cancer had simply messed with the wrong person,” said School Committee vice chair Nancy Richards-Cavanaugh. “It is an honor to have served on the School Committee while she was superintendent and to see up close how her vision and determination for our students moved our district forward. Her death is a loss to everyone who had the privilege of knowing her.”

Former School Committee chair Jean Bertschmann, who served on the School Committee when MacLeod was hired and for the entirety of her five-year tenure, described MacLeod as “a leader of consequence.”

“Her work in Hopkinton will have a lasting impact on our children in the quality of instruction and services they receive, the focus on their social emotional health, and the provision of a safe, appropriate, and inclusive environment,” she said. “She truly valued every member of our community. We are fortunate to have benefited from her vision, energy and leadership, and send our heartfelt condolences to her family.”

The School Committee voted to hire MacLeod in January 2013, with a start date of July 1 of that year, after she served as assistant superintendent for Easton Public Schools. She had never served as head of a school system prior to Hopkinton. MacLeod was selected over interim superintendent Steven Hiersche, who had replaced Jonathan Landman, who had resigned the previous May after less than a year on the job.

MacLeod, a native of Quebec, received her doctorate in developmental studies from the School of Education at Boston University. She held a master’s degree in educational leadership from the College of New Jersey and a master’s in applied child psychology from the University of Guelph in Ontario, Canada. She received her undergraduate degree in education from Brock University in Ontario. Prior to working in Easton, she had served as an elementary school principal and director of literacy in Pembroke. Earlier, she was a classroom teacher in New Jersey’s Montgomery Township school district.

Upon her retirement, MacLeod expressed her appreciation for Hopkinton.

“It has truly been an honor serving as your superintendent since July 1, 2013, and I am very proud of the administrative team and educators who are responsible for the many achievements that the district is known for,” MacLeod wrote in a letter to the School Committee on Feb. 1, 2018. “Your support throughout this time has been greatly appreciated and I will miss our work together.”

Before her passing, MacLeod had moved to Vermont with her husband to be closer to her children and grandchildren.