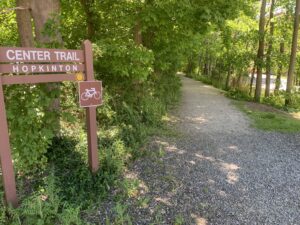 Hopkinton has an ambitious goal to have a trail system that runs through town, picking up from the Upper Charles Trail in Milford and connecting to a proposed trail in Ashland.

A number of people have been hard at work to accomplish this task, and while they are united in pushing to see the trail system grow, a rift has developed regarding the makeup of the new trails.

One group says any new trails that go through wooded areas should be packed stone dust, the kind used on the Center Trail and Echo Trail. The other side says a paved route — like the Milford trail — is the better option.

David Dollenmayer, a member of the Hopkinton Trails Club who says he takes daily morning walks on the Center Trail, supports the stone dust option for trails that go through woodland areas (he’s OK with paved trails in open spaces). He started a petition, first gathering signatures in person until the COVID-19 pandemic hit, then turning to an online option. Together he says he has more than 250 names.

“Everyone that I approached and everyone whom I know who uses Center Trail want to have these trails, both Center Trail and Echo Trail and any intervening sections that run through wooded areas, to be kept unpaved,” he said. “All I was trying to establish was this sort of overwhelming sense by the people who use the trails that we would rather not have them paved.”

Dollenmayer has support from Peter LaGoy, chair of the town’s Trails Coordination and Management Committee and the driving force behind the construction of the Center Trail and Echo Trail.

“I am absolutely against paving,” LaGoy stated, noting the surface is better for people’s legs, whether running or walking. “There are areas where pavement makes some sense, but in general I think stone dust is a better surface.”

However, the new trails fall under the purview of the Upper Charles Trail Committee (UCTC), and chair Jane Moran has a different point of view.

“It’s our goal as a committee to get the state to pay for it through the MassDOT [Department of Transportation] grant program,” she said. “One of the MassDOT requirements is that it be not only handicap-accessible, but it be two-directional and it be multi-purpose, for both bicycles and pedestrians and other multiple-use users.

“[MassDOT], through their research and their requirements, have stated the best type of surface for this is a hard surface — pavement of some sort. Stone dust just doesn’t quite cut that. … If we want the state to pay for it we have to fall within their guidelines.”

LaGoy said that a financial analysis should favor stone dust, whether or not the town receives substantial state funds.

“The issue is when you put asphalt down the roots go looking for air and they push up through the asphalt,” he said, noting that this is now happening in Milford, while neighboring Holliston, which used stone dust for its entire section of the Upper Charles Trail, has no such problems. “Fixing it is not cheap. With a soft surface, stone dust, there’s no incentive for the roots for push up, because they can get sufficient air.”

Lagoy added that he reached out to the Central Region of MassDOT and was told while the state prefers hard surfaces, it can fund soft surfaces as well. He noted that money to be used toward engineering can be obtained through different sources, such as the Department of Conservation and Recreation (DCR), and stone dust is so much cheaper than asphalt the town wouldn’t even need the MassDOT money to balance things out.

Said LaGoy: “It’s going to be roughly $1 million per mile for asphalt, and the town would be responsible for 10 percent of the grant plus engineering costs. You can build a soft surface for that same $100,000.”

Moran said she believes there is a less vocal but larger group of more casual users who would prefer paved trails, and she insists if the trail is properly prepared — roots cleared a few feet below and to each side of the trail — asphalt is the better long-term option.

She added that Center Trail and Echo Trail were built on abandoned rail bed systems, land that did not require as much preparation due to its previous use.

“We’re looking at something very, very different, where we have to go through open space that the town owns that goes through wetlands,” she noted. “There’s no more rail beds in town to be acquired.”

Dollenmayer said he plans to speak in front of the Select Board when the issue is put on the agenda. However, it’s not clear when that might be. Moran said the UCTC is about three-quarters finished with its plan, but her committee was deemed non-essential during the pandemic so it has not met, even online, for some time. Additionally, there were some requests for land purchases that were on the warrant for Annual Town Meeting, but that’s been postponed twice, and while it’s expected to convene in September that’s no sure thing.

“We’re taking our charge from the Select Board seriously,” Moran said. “They want this trail from Milford to Ashland through Hopkinton. Well, where does that take us? It takes us through wetlands, it takes us in front of small neighborhoods, it takes us down sidewalks. How are we supposed to negotiate this without offending people? We do not have a ready-made pattern. We have to really do our research and come up with affirmative engineering studies and get the neighbors on board and get the townspeople on board. It’s not a simple project.”