At its public meeting on Wednesday, the Upper Charles Trail Committee (UCTC) provided a progress report on the Hopkinton portion of the proposed trail project, an 8-mile path through town that extends from Milford to Ashland. The presentation by UCTC Chair Jane Moran and engineering consultants from VHB included a video flyover of the trail and background information on the project development. During the public comment portion of the meeting, nearly 20 residents spoke, with the majority expressing concerns about safety.

Providing history on the project, Moran explained that the committee was appointed by the Select Board in 2012 to plan, design, engineer and build the multi-use path. After consulting with the Conway Group, the committee’s main takeaways were that it must use mostly town-owned open space and that a professional firm would be necessary to manage the intricacies and challenges of the project.

The proposed trail alignment (map above) presented at the meeting had been unanimously approved by the committee. Moran explained that UCTC’s next step would be to go to the Select Board in January to submit an environmental notification form (ENF), noting that the ENF is “one small step in this huge project, just as this meeting is.”

Christine Champeau of VHB explained UCTC’s goal is to develop an alignment that provides a shared-use path connecting to key nodes and destinations in town such as recreation sites, businesses and neighborhood developments. Champeau explained that to qualify for state and federal funding, certain design guidelines must be met, taking into consideration various constraints such as wetlands, materials, space, historic sites, utilities, cost and other parameters.

Champeau said that the group used 20 different categories to rank various path options and then created at least three alternatives for each segment of the trail. The project is divided into 11 segments, but UCTC currently is focusing on the center segments (5 and 6) that include town-owned property that would allow the project to begin design as soon as possible. The center segments would provide a stand-alone shared-use path from the school campuses to the Center Trail to the downtown corridor and the Town Common.

The northern and southern segments also would provide great connectivity, Champeau explained, but land acquisition would be required, which could delay action for several years. The more immediate and successful completion of the center segments, Moran argued, could “be a very attractive stand-alone unit,” noting that UCTC’s goal is “to provide connectivity and accessibility.”

In Segment 5, the Campus Trail Connector connects to Hopkins School and Hopkinton High School. A MassTrails grant for preliminary design was received in 2021, and design since has been completed. In Segment 6, which includes EMC Park and Marathon School, UCTC aims to conduct the same level of design as Segment 5 and hopes to receive a MassTrails grant in 2022 to do so.

Matt Chase of VHB stressed that the group was “straddling the planning phase and design phase” and that these are preliminary, not final, designs. Chase also noted additional studies and engineering will need to be completed and plans likely will shift as the project progresses.

Moran noted that prior to Wednesday’s meeting she had heard concerns from residents about the fact that the proposed path includes three Hayden Rowe Street (Route 85) crossings; citizens cited concerns about safety and traffic and noted incidents in which a child on a bike was killed and another incident in which a woman pushing a stroller was struck by a car.

To address these concerns prior to opening the meeting for public comment, Champeau explained that the path along Hayden Rowe would be a “separate facility offset from the road” and not a traditional sidewalk. She explained the group would not design something with less than a 5-foot buffer and, if needed, a physical barrier could be erected. Champeau also noted that rapid flashing beacons or overhead systems could be installed to call more attention to crossings. The plan also could potentially incorporate tools to slow traffic on the roadway, including narrowing the roadway or incorporating visual tools or speed humps so drivers would be aware of changing conditions.

Despite this attempt to assuage concerns, the majority of residents who spoke during the meeting’s commenting period mentioned Hayden Rowe Street safety as their primary concern with the plan. Commenters repeatedly cited traffic and the previous two pedestrian accidents as reasons to reconsider the three Hayden Rowe crossings. Two residents, after hearing Champeau’s explanation about the offset design of the path, expressed that they indeed felt more comfortable with the plan despite their previously held concerns.

At least one resident viewed the Hayden Rowe crossings as a potential positive, noting that more crossings could be safer for traffic flow patterns and help attune drivers to slow down.

Beyond Hayden Rowe concerns, one resident said that the path going by the schools is “not a positive,” as she doesn’t want “people walking up from wherever.” Another resident was worried about parking capacity around EMC and near town playgrounds and baseball fields; he also was concerned about car break-ins, arguing that the trail lots would be an easy target.

Property owners along Hayden Rowe expressed concerns about potentially losing part of their yards to the trail, although UCTC has stressed it is avoiding the use of private property.

Several residents preferred that the path would incorporate more wooded trails rather than following existing roadways. One commenter expressed a preference for stone dust (similar to the Center Trail) versus asphalt, although UCTC has not yet decided on surface materials for all segments.

Some attendees argued that they should have been informed of the plans prior to Wednesday’s meeting and that public outreach efforts were not sufficient. They asked for ongoing feedback opportunities and additional traffic studies, as well as for UCTC to delay presenting the ENF in January.

Despite their concerns, several of the commenters stressed that they are avid trail users and appreciate the work being done to improve Hopkinton’s public paths. One resident, a newcomer to Hopkinton who has appreciated meeting her neighbors through the trails, acknowledged that the plan wasn’t perfect, but she urged other attendees to not let “a quest for perfection prevent us from doing something good that helps us build this community.”

Town Engineer Dave Daltorio emphasized that as the project moves forward, there will be additional public meetings and details released. “This is the tip of the iceberg,” he said. “From this point forward, we’ll start drilling down in further detail. All this feedback is great.”

As the meeting closed, Moran stressed: “Remember that this is one small step in a giant, giant project, and we will continue to work on it.” 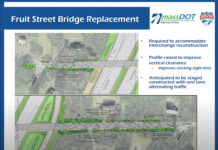 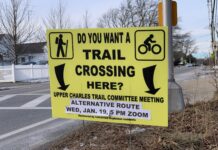 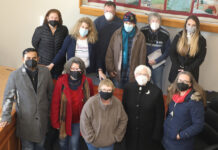