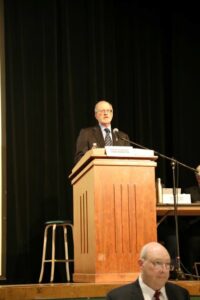 Town Meeting voters established a single-structure historic district at 76 Main St. in reaction to a plan to tear down the Aaron and Lucy Claflin house to make way for a new three-story mixed-use downtown development.

Built in the 18th century, “It is one of the four oldest houses in the town center,” said Michael Roughan, chair of the Historical Commission, which sponsored the Town Meeting article.

The structure, owned by town resident Paul Mastroianni, was under a demolition delay order set to expire July 6.

Discussion, which lasted for 30 minutes, was at times contentious as residents weighed in on the issues of historic preservation vs. property owners’ rights before voting 287 for and 70 against to save the building (a two-thirds majority was required to pass).

Mastroianni offered to give away the building and even pay to help move it off the property, and he declared just before the vote, “My property rights are being violated.”

He had some support — or at least sympathy — in the crowd.

“Well, happily, this is not zoning, so in fact it is not spot zoning,” Miyares responded.

“There are in fact dozens of single-structure historical districts all over the Commonwealth,” Miyares added.

There were a number of zoning articles presented to voters earlier at Town Meeting.

Article 32 proposed allowing car washes in the Industrial A District and no longer allowing them in the Downtown Business District. The article failed to receive the required two-thirds majority by standing vote, with 226 for and 117 opposed.

Article 33 proposed allowing indoor recreation businesses in the Industrial A District. It passed by a unanimous vote.

Article 34, sponsored by Paul Mastroianni and a citizens petition, proposed allowing self-storage businesses by right in the Industrial A District. An amendment to change to use by special permit failed to receive the required two-thirds majority. The original article then failed in a standing vote, 145 for and 190 against.

Article 35 proposed allowing retail stores associated with existing businesses in the Industrial A District. The article passed, having received the required two-thirds majority by standing vote, 305 to 8.

Article 36 proposed ways for the town to bring low-income units into the Legacy Farms development in compliance with state regulation. The article failed by standing vote, 305 to 8.

Article 37, related to the previous article, proposed a different method for the town to maintain the required percentage of affordable housing units in compliance with state regulations. The article passed unanimously.

Article 38 proposed changes to bylaws governing restricted open space land to include “cultural uses” in order to allow the possibility of constructing a marathon center on donated land adjoining Legacy Farms North. The article passed by a standing vote, 222 to 2.

No action was taken on Article 41, which sought a three-year moratorium on subdivisions, garden apartments and village housing, following a request from the originators of the article.

Article 42, a one-year growth restriction, purposed “to implement a reasonable and temporary cap, until June 30, 2020, on construction of new dwelling units in the town,” failed.

Article 43, to change the title of Board of Selectmen to Select Board in zoning bylaws, passed by a standing vote, 258 to 53. 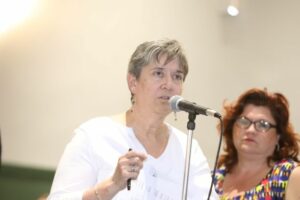