Walsh siblings’ success has familiar rink to it 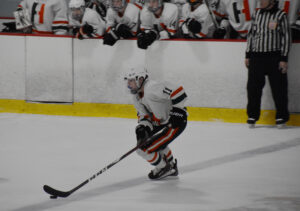 Neither Sean nor Riley Walsh is exactly sure when they started skating. It was probably when they were around 3 or 4 years old, however, on a homemade rink in the Hopkinton family’s backyard.

But the siblings know their early skating prowess turned into a love for the game of hockey that has taken them — and their younger brother, Brady — around the world.

Sean Walsh, 16, is a junior on the Hopkinton High School team and centers the Hillers’ top line. Riley Walsh, 14, is a freshman at Vermont Academy, in Saxtons River, Vermont, a tiny village in the southern part of the state that might be best known for being the home of the independent school.

“It’s very small, which is nice because it’s more one-on-one work with a teacher,” Riley said. “And the hockey is great.”

Riley said it’s been a challenge to be away from home, but a pair of teammates from the Czech Republic have taken her under their wing and been helpful and encouraging as she adjusts to the higher level of competition. She got off to a strong start, recording four goals and four assists in helping her team to a 5-1-1 record heading into January. 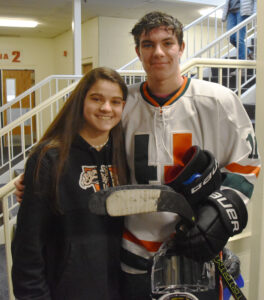 Sean and Riley were together a couple of days after Christmas, a rarity now with Riley playing in a different state. Sean said his presents included a new stick. Both he and Riley found their stockings stuffed with hockey tape.

Growing up, both siblings said they would often travel to each other’s games and sometimes skate at each other’s practices. Their older sister, Meghan, played when she was younger, Sean said, and the youngest sibling, Brady, is a standout middle school player. Their parents, Steve and Kelley, have spent countless hours at rinks all over New England and beyond.

The Walshes also spent a great deal of time skating and playing together, particularly in their backyard rink.

“When we were little, we would be out there until our parents called us in,” Sean said. “We had lights above the rink so we could keep playing when the sun went down. We’d be out there until 8 or 9 at night, then come in and have some hot chocolate.”

Riley remembers the competition in the backyard being fierce at times but fun.

“Everybody wanted to win and put in our best work,” she said. “But Sean was really helpful with my shot. We’d be out there every day after school, once we were done with our homework.”

Sean is Hopkinton’s leading scorer, with an impressive 12 goals and eight assists through the team’s first six games — including back-to-back hat tricks in late December — as the Hillers started the season 4-2. Playing in college is one of his top hockey-related goals, and he said the search will begin in earnest at the end of this school year.

“I’m going in with an open mind,” he said. “Until then I just want to stick with it and keep working hard and playing the best I can.”

Riley also has college hockey in her sights and said playing for a Division 1 program is one of her top goals. She also has the Olympics on her long-term radar, as well as playing in the National Women’s Hockey League. Like Sean, she got her first taste of international competition in Sweden.

“It was awesome,” Riley said of the experience, which included playing against boys and experiencing a more physical game. “I got to stay with a host family and learn their traditions and how their life works.”

So which of the high school Walsh siblings is the better player?

“I would say me,” Sean said with a chuckle. “Just because I am the oldest.”

“But I have time to catch up,” she added.