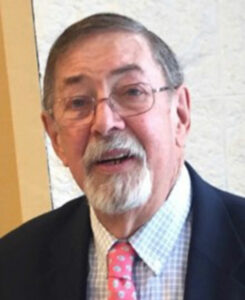 William F. “Bill” Sparks died on March 21 at Beth Israel Hospital in Plymouth after a long struggle with cancer. He was born Jan. 1, 1947, in Cambridge, the son of William V. and Gloria M. Sparks. Bill graduated from Hingham High School in 1964 and the Franklin Institute of Boston in 1966. He volunteered for the U.S. Army and was stationed in Germany from 1966-69. Returning home, he married his childhood sweetheart, Lauren Melanson, in 1970 and settled in Norwell, where he served as a volunteer firefighter and EMT. The couple would have celebrated their 49th wedding anniversary later this year. For the next five years Bill worked in the insurance industry while he and his wife raised four daughters, Kristin, Keri, Kendra and Katie.

In 1988 the family moved to Falmouth, where Bill served as security director for the Woods Hole Oceanographic Institution. During his retirement he enjoyed volunteering and participating in local veterans organizations.

He is survived by his wife, Lauren, four daughters: Kristin Gonsalves and her two children, Mark and Katelyn, of Falmouth; Keri Sanchez, her husband, Carlo,s and their two children, Alex and Gabe of Hopkinton; Kendra Friel, her husband, Pete, and their three sons, Gavin, Logan, and Ronan, of Falmouth; and Katie Sparks of Falmouth. He also is survived by two brothers, Robert Sparks of Edgartown and Thomas Sparks and his wife, Joanne, of Hopedale, and a sister, Joanne Sparks-Pessotti and her husband, George, of Nashua, New Hampshire, as well as his beloved canine companion, Hunter.

A memorial service was held March 26 at the Chapman, Cole and Gleason Funeral Home in Falmouth. For the online guestbook, visit www.ccgfuneralhome.com. In lieu of flowers, donations can be made to the Disabled American Veterans, www.dav.org.