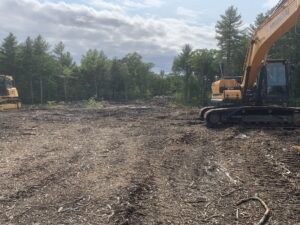 Grasshopper Energy has cleared a large portion of the site off Wilson Street in preparation for a solar array. PHOTO/JERRY SPAR

Two cease and desist orders were filed last week against Grasshopper Energy to stop construction of a 2.4-megawatt solar farm between Wilson Street and Cedar Street after allegations were made by the Narragansett Indian Tribal Historic Preservation Office that artifacts sacred to the tribe’s culture were destroyed.

“The Narragansett Indian Tribal Historic Preservation Office had done an investigation of the site and found some items of historical significance that they felt it was important to preserve on the ceremonial hill,” explained John Gelcich, the town’s principal planner. “There is a condition in the special permit that says that, if they find any new resources that they bring it before the Planning Board.”

He confirmed that two separate cease and desist orders were issued, the first by the tribal office and the second by the town, to stop work in the area of the ceremonial hill, which sits on the western portion of the site.

“My understanding of the town’s cease and desist order is just to bring the historical resources to their attention and to do what needs to be done to protect those resources,” Gelcich explained. “This will bring all parties to the table to discuss that.”

Narragansett tribal historic preservation officer John Brown was more direct in his criticism of the company. He said items of cultural significance were destroyed, including some large stone formations. Brown said the stones would have been used “several hundreds of years ago to hundreds of thousands of years ago” as table-like structures on which ritual ceremonies were performed.

“We sent a cease and desist order because [Grasshopper] did not comply with the special permit issued by the town,” said Brown, whose organization is based in Charlestown, Rhode Island. “Several areas of the stone wall have been pulverized.”

Brown said he received a letter on June 28 from Grasshopper dated June 23 notifying him that work on the project was to commence on June 24. This prompted the issuance of the order. He said that he gave Gelcich a list of concerns and that the tribal office was in the process of compiling a report on the site along with an evidentiary finding.

He added that the report would have been filed sooner, but that an employee had a medical emergency in the family that led to the delay.

“Although the new plan was not submitted to the developer, we did inform them verbally of the situation,” Brown said. “It bothers us that the other parcel is destroyed. We only asked to preserve 20 to 28 percent of the land.

“We wanted to make sure we were clear as to what they were doing,” he added, alleging that a Grasshopper representative told town officials that the tribe was trying to stop the project. “We feel they were putting us at odds with the town. We had a very adult conversation with the town planner about it. We were trying to work with the developer.” 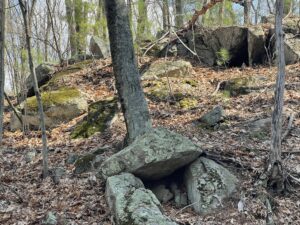 Tribal officials would prefer some historic rock formations at the Wilson Street solar site not be disturbed. PHOTO/CORA PEIRCE

Brown indicated much of the damage cannot be fixed.

“On 2.5 to 3 acres of the land, they destroyed the stone figures,” he said. “They just blasted them to rubble. We told them we would ignore what they did if they preserved the 0.8 to 1.2 acres on the ceremonial hill, out of 17 acres, as long as they were being cooperative.”

Cora Peirce, the tribal affairs officer, said she investigated the site twice on behalf of the tribal office in preparation for preparing a report.

“This was one of the most disturbing sites I’ve ever witnessed, and I have been doing this for more than 20 years,” Peirce said, noting that the large stones were pulverized. “They did not keep the stone wall intact. There were trees piled on top of the stone wall.”

Peirce’s main concern now is the preservation of the ceremonial hill, which is about 3.4 acres in an area near the Cedar Street side of the property.

“I wanted to work with them to reconfigure where things should go,” she said of the solar panel mounting racks. “But financially they said it was not profitable for them without that little piece of land on the ceremonial hill.”

Peirce said she visited the site originally on March 12, and then a second time with her daughter on April 21.

“All the work was supposed to be done by hand,” she said. “The contractor had electrical equipment. My daughter had come to be an observer for the tribe. We always bring youth with us so that they will know the history and what was there. The lease for the solar farm will be up in 25 to 30 years, so we want them to remember. It really upset her to see what was done.”

She said the two workers on the site told her they had never worked with a tribe before.

“They said, ‘We are doing what we want,’ ” she stated. “They said they were going to grade the hill.

“I understand the need for green energy and for it not to be interfered with,” Peirce continued. “This is not so much for progress; they had to cross through wetlands. They bulldozed the wetlands.”

She returned on April 27 and 28 to speak to the contractors, and also with Brown on May 13 to assess the damage.

Peirce noted that the wetlands have “wild and scenic status.”

Brown said that he plans to address the wetlands crossing with the Army Corps of Engineers. Peirce said she is bringing up the matter with other tribes throughout Massachusetts.

Peirce and Brown also raised questions about the owner of the property. Southborough-based The Preservation Trust leased the property to Grasshopper despite a mission statement that the organization would “acquire and preserve natural resources and wildlife areas for the use and enjoyment of present and future generations” as well as “preserve and protect historic sites.” A call to The Preservation Trust seeking comment was not returned.

“It’s a bizarre property on a good day,” Peirce said of the 37-acre site. “Now 15 to 17 acres have been cleared. I would be listening to the pound, pound, pound on the site while I was talking to John Gelcich on the phone.”

She added that she had submitted an initial report on the site to Grasshopper project development director Grace Russell.

“But she kept saying she needed more information,” Peirce said.

“The cease and desist order was directed to him,” she said. “This is all on Grasshopper.”

A representative from Grasshopper, which is based in Canada, insisted the company wanted to “further cooperate” with the tribe and stated that “no indigenous historical monuments or landmarks have been destroyed.”

“As it relates to indigenous communities, Grasshopper has always remained respectful of their history, their culture and social values, and way of life,” stated Tudor Ulianovschi, Grasshopper’s senior vice president, global government relations. “We recognize the importance of engagement with Indigenous leadership including members of the Narragansett Tribe of Rhode Island.

“Grasshopper has developed, in many of its projects in different jurisdictions, strong relationships with Indigenous partners based on trust and understanding. Grasshopper has taken due diligence to ensure local Indigenous treaties and land claims have not been violated. …

“Grasshopper has invited the local Indigenous community to jointly address any potential concerns and we look forward for their availability to have an open dialogue.”

Brown agreed that discussions should take place to find a consensus, but he said the developer is late to the table.

The issue is to be discussed at an upcoming Planning Board meeting, potentially July 26.