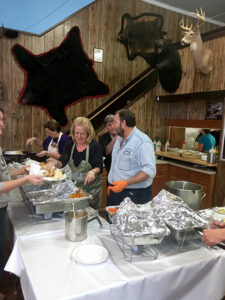 Some will eat traditional turkey. Others will eat the deep-fried version.

But no one will eat alone.

Once again, the Woodville Rod & Gun Club will serve Thanksgiving dinner to anyone in the community looking for a place to go on the holiday. Dinner is served from noon to 3 p.m. at the club (252 Wood St.).

Members of the club arrive before sunrise to prepare the meal, with traditional roasted turkey, deep-fried turkey, stuffing, mashed potatoes, butternut squash, green vegetables and salad, said Karen Remillard, treasurer of the club and organizer of the Thanksgiving dinner with her husband, Marcel Remillard.

Dessert is made by club members.

The dinner began about 20 years ago by then club president Dennis Smith after the death of his mother.

Originally targeted to senior citizens, the dinner now is served to anyone seeking a hot meal and camaraderie on the holiday.

Diners range from senior citizens to entire families. “They’re so appreciative,” Karen Remillard said. “What better way to spend Thanksgiving than with people who deeply appreciate it?”

In past years, meals also have been distributed to police officers, firefighters and others who are serving the town and unable to be home on the holiday.

The meal would not be possible without donations and volunteers, she said.

Volunteers from within the club and beyond help cook, serve and assist with whatever is needed. Some stay an hour, others the entire time, but all provide valuable support.

“We have a huge amount of people that love to come and donate their time,” she said.

“I’ll put you to work, no problem,” she added with a laugh.

The turkeys are donated, primarily by club members. Vegetables also are provided by club members and purchased from local farmers. Cash donations typically cover most of the remaining cost, Remillard explained.

Last year was the first time the meal cost the club money, she noted. But the rewards are priceless, reflecting the day’s theme of gratitude and giving.

Guests enjoy “coming down there and just being with the people that are there, they were so appreciative,’’ she said.

The dinner, she said, “is the most rewarding of all the events we do.”

Anyone interested in making a donation or learning more about the dinner can contact Karen Remillard at karens.remillard@gmail.com.