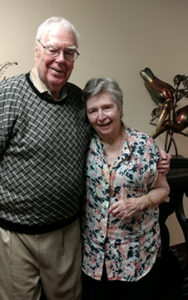 Fairview Estates residents Sona and Henry Wyman celebrated their 70th wedding anniversary on Aug. 29. Henry and Sona met when Henry came home from serving in the Army and went to the library in Bangor, Maine, where Sona worked. She made quite an impression on him — he remembers that she was wearing a green wraparound dress! On their first date, they went to see a play at Bangor High School. Henry says that he “fell madly in love with her.” Eventually, after dating for a while, Sona turned to Henry (in the car) and said, “You’re taking me for granted. Are you going to marry me or what?” And the rest is history! Henry went on to become a minister, and he and Sona had a son and a daughter. Their secret to a long, happy marriage is being able to adapt and to love and care for one another.