Yoga for a cause 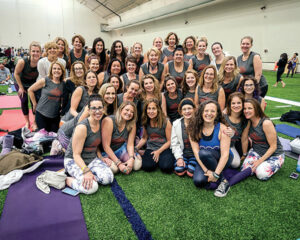 A Hopkinton yoga teacher and her students raised close to $25,000 for Boston Children’s Hospital in an event that reminds us that we are “all in this together.”

Jennifer Houghtaling, owner of Shanti Yoga on Wood Street in Hopkinton, was a team leader for the Yoga Reaches Out program, a fundraiser for Boston Children’s Hospital. The annual fundraiser has raised money for the hospital’s Hale Family Center, where patients and their families are able to benefit from services such as yoga, reiki and massage during their stay.

Although this is the second year that Houghtaling was involved in Yoga Reaches Out, this year was extra special as she was asked to lead more than 1,200 people in one of the five morning yoga sessions at the Empower Field House next to Gillette Stadium in Foxboro.

“It was such a huge honor,” said Houghtaling, who has been a yoga teacher for the past 15 years and has owned the studio in Hopkinton for the past two years. “The whole day was amazing.”

The Yoga Reaches Out event, this year held on April 28, brings together more than 1,000 yogis, marketplace vendors, sponsors and volunteers from across New England to enjoy a day of “yoga, fundraising, and empowerment.” In the morning, yoga sessions are led by top New England presenters, which included Houghtaling, and the afternoon brings a nationally known yogi to lead a session.

As with the studio’s motto “Strength in community,” Houghtaling’s yoga community pulled together as a team to help others again this year. Doing numerous individual fundraisers — everything from bake sales to raffles — the team of 40 people from Hopkinton raised almost $25,000 for the Boston Children’s Hospital Hale Family Center. Over the past two years the ream has raised more than $40,000 for the cause.

“Our teachers and members are always doing a lot of community outreach,” Houghtaling said. “They have raised thousands of dollars for charities such as Project Just Because, the Pan Mass Challenge, and the Tour de Cure.”

Being a part of the Yoga Reaches Out event is a great example of the yoga ideal of “seva,” or the art of selfless service, said Houghtaling.

“Yoga is about coming back to yourself and finding that innate goodness, to find that clean slate where you can do your best work and where you can realize we are all in this together,” she said. “This day was a beautiful example of that.”