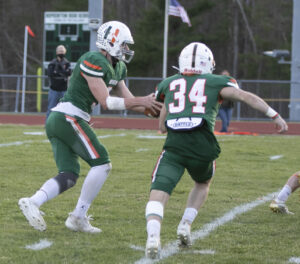 Joey Carrazza (34), returning for his junior season, is expected to be the Hillers’ featured running back. FILE PHOTO/JOHN CARDILLO

It’s been a quick turnaround for the Hopkinton High School football team, which played in a modified early spring season last school year due to the ongoing pandemic. The Hillers bring a young squad to the field this year, but first-year head coach Mark Sanborn is happy to have his guys back in a more “normal” setting.

“Everything is going well, the kids are working hard and the energy is high,” Sanborn said in late August, after the first week of practices. “Early on in the season, that’s all you can ask for.”

Hopkinton kicked off practices following a three-night skills clinic in which more than 50 members of the program participated along with players from five other schools. Sanborn said it was good to get the players in helmets and working on some football-related movements and skills.

“It was a good chance to get those kids out there and get them running around,” he said.

HHS is young this year, with the junior class figuring to be a focal point when it comes to playing time. But a few seniors will be playing key leadership roles both on and off the field, including senior captain Aidan Kelley.

“He played for us last year on both sides of the ball,” Sanborn said. “He will be a fullback and a linebacker and he has been great in leading the kids on the field and doing the right things. We are expecting big things out of him.”

Brady Auslander, a tight end and defensive lineman, is another senior with varsity reps under his belt. Many other spots will be manned by juniors.

Joey Carrazza will be a featured running back, and fellow junior Robert Litscher is set to take the reins at quarterback. Paul Litscher (Robert’s twin brother) will be one of his targets at wide receiver and also should see time in the defensive backfield. Wyatt Stevens is expected to be one of Hopkinton’s most versatile players.

“He will be a halfback, a wide receiver, a defensive back,” Sanborn said. “He is going to be all over the field for us this year.”

Sanborn said he and the coaching staff will look to other players to step up as the season begins to unfold. The longtime assistant coach has a typical “one day at a time” approach.

“I have told the kids that it’s about stacking good practice on good practice and having really good days,” he said. “We want to build their skills and build good habits.”

But Sanborn does have particular things he wants to see from each side of the ball.

“Defensively, we want to be fast to the football and be skilled and disciplined tacklers — that is going to be important,” he said. “On offense, it’s all about protecting the football, knowing our assignments, and having a variety of plays we can run.”

Hopkinton scheduled scrimmages against Shepherd Hill and Grafton, a pair of strong Central Massachusetts programs. The Hillers will open the season Sept. 10 against Wayland, a traditional nonleague opponent that was not on the truncated schedule last spring. Hopkinton has nonleague games scheduled against Foxboro, Tewksbury and Nauset. The Tri-Valley League slate includes Norwood, Holliston, Medfield and Westwood before the start of the playoffs.

Under the statewide playoff format, the Division 2 Hillers will either begin the postseason in Week 9 or play a consolation bracket against other non-tournament teams. Hopkinton will play Ashland in its traditional Thanksgiving Day game, but that is the last thing on Sanborn’s mind at the moment.

“It’s a process,” he said. “Right now, I am just focused on today’s practice.”