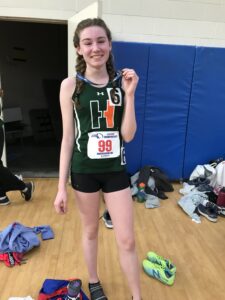 Sophomore Olivia Jones was seeded fifth but used a strong finish to win the Division 3 title in the girls 2-mile.

Hopkinton High School showed off its distance running prowess during the MIAA Division 3 state track and field meet at the Reggie Lewis Center on Feb. 16, with Hillers junior Alex Brown and sophomore Olivia Jones winning their respective 2-mile races and breaking school records in the process.

At the same meet, junior Schuyler Gooley finished second in the mile in 5 minutes, 1.94 seconds, breaking her own school record and qualifying for nationals.

All three advanced to the all-state meet the following weekend, with Brown and Gooley breaking their own school records again.

“I think it’s so cool that we have so many good distance runners on the boys and the girls team,” Jones said. “I don’t know if a lot of other schools have that.”

While the 2-mile pair ended up on top of the podium, their paths to first place were a bit different. Brown came in among the favorites. When he took off with the lead pack, he actually found the pace was a bit slower than he wanted to go. So when Brown saw a signal from his coach, he took off and led the the rest of the way, cruising home in 9:42.44 seconds, breaking his own school record.

“I was by myself most of the race,” he said. “This was my biggest win and it feels awesome. It was a great race and I was really happy to win it, especially against the top runners.”

Jones came into the event seeded fifth, but said she felt she could hang in with some of the girls who had faster seed times. She ran third most of the event, then shifted into gear at the end to blow past the competition and finish in 11:04.67. Not wanting anyone to catch her, Jones ran a blistering final lap and ended up shattering the Hopkinton program record (Shelby Aarden in 2014) by more than 11 seconds. It was a whopping 33 seconds faster than Jones’ previous best time.

“I was really surprised,” she said. “I wasn’t even thinking about the school record.”

The time is also fast enough to qualify Jones for nationals.

Brown, who also won the 2-mile at the Tri-Valley League meet, started running when he entered Hopkinton High School, but the junior said he really started taking the sport seriously last year with an eye toward running in college. Jones, a sophomore, also hopes to continue her running career at the collegiate level. After running cross country in middle school, Jones decided to pursue running instead of field hockey when she arrived at HHS.

“It ended up being one of the best decisions I ever made,” she said. “I really like the team, it’s so much fun.” 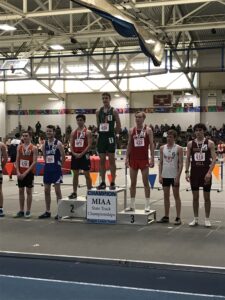 Junior Alex Brown found himself atop the podium after an impressive performance in the boys 2-mile.

Brown said he and Jones talk about their training and how they feel going into races. They and the rest of the Hillers’ distance runners spend their weeks racking up the miles, with many runs averaging around 5-7 miles per outing and longer runs totaling 9-10 miles or more.

The training prepares them for the grind of running lap after lap — 16 in total — to cover the 2-mile distance on an indoor track.

“I try to visualize the race and how it’s going to go and just try to keep giving myself positive feedback, telling myself it’ll be over soon,” Brown said. “It gets boring and it’s hard, so you have to give yourself positive thoughts.”

Jones, who captured a divisional state title last fall in cross country, agrees the races are challenging, but she also said being with her teammates is an important part of her experience in what is often considered an individualized sport.

“I enjoy being on a team and competing,” she said. “It feels almost like a close family.”