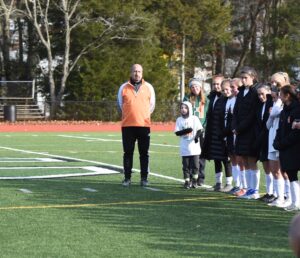 Tom Skiba, who helped the varsity during last fall’s run to the state title game, is the team’s new head coach.

Tom Skiba knows he will have plenty to live up to as he takes the reins of the Hopkinton High School girls soccer program next fall. The new head coach inherits a team coming off the program’s first sectional title and an appearance in the state title game, and he said he’s excited for the chance to keep the Hillers playing at a high level.

“It’s fantastic,” Skiba said after being named coach last month. “I have spoken to a couple of players on the team and we wish the season could start in a couple of weeks instead of next fall.”

Skiba, a Hopkinton resident for two decades after growing up in Western Massachusetts, replaces Wayne Sygrove, who moved to California after leading last year’s successful run.

“I helped out a bit during the tournament run and it was an absolutely blast seeing the girls have so much success,” Skiba said. “We will build on the style they played and the techniques they used and hopefully we can repeat that success, if not do better.”

The Hillers established themselves as one of the best defensive teams in the state last year, rattling off four straight wins in the sectional tournament without allowing a single goal. Anchored by senior goalkeeper Natalie Calkins, Hopkinton allowed just seven goals through the entire regular season.

Skiba said he wants to continue to be a defensive-minded team, but he wants to see his squad go on the attack a bit more as well.

“We will stress a possession-based style of soccer, small passing, maintain possession of the ball, I intend to build on that but I like to be slightly more aggressive attacking the goal in the hopes we get more goals,” he said. “We will take more chances and try to get our defenders involved in the attack.”

The Hopkinton job will be Skiba’s first at the varsity level. He coached the Hillers junior varsity team last fall and has been involved in youth coaching as his own children, Nick and Kylie, have moved through the Hopkinton school system. Nick was a member of the HHS varsity boys team this past season and Kylie played for the girls middle school team.

Skiba grew up in Chicopee and won a state championship with his school in 1983. He went on to play four years of soccer at UMass Amherst. He served as a member of the Hopkinton Youth Soccer board of directors for five years.

“Tom’s strong soccer background, passion for the game, experience within the program and desire to provide a great experience for our student-athletes truly distinguished him in the interview process,” HHS athletic director Dee King said. “He already has great rapport with the girls in the program and was closely involved with the team in the midst of their successful run to the state championship this year. We are excited to bring him on board as the next varsity coach and look forward to seeing the positive impact he has on the girls soccer program.”

During his playing days, Skiba was a central defender, an experience he said he hopes to use in his new position.

“I like defense, but at the end of the day I think there is a lot to be said about attacking teams,” he said. “Hopefully I understand defenses, being a defender all my life, and we can use that knowledge to be very opportunistic.”