So a few years ago, when his children were students in the Hopkinton schools, he decided he would try to help eliminate some potential future clients.

“A big pet peeve of mine is that the schools don’t teach financial literacy,” said Baldiga, a partner and co-chair of Mirick O’Connell’s creditors’ rights and bankruptcy group. “For several years the Boston Bar Association has had a financial literacy program, and when my kids were in school I ‘adopted’ Hopkinton High School. So, every fall and every spring I grab one of my colleagues and we go in and teach several sessions of financial literacy to juniors and seniors who sign up for a couple of different classes — math classes, passages.
“We talk about what it means to have a credit score, compound interest, interest rates on loans, budgeting, all that stuff.”

Veteran public speaking and drama teacher Valerie von Rosenvinge teaches the HHS passages course, which is designed to help students transition to the real world, and she welcomed Baldiga after he contacted the school. 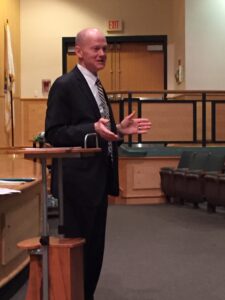 “For years in public speaking I had given an assignment to students to do a speech about what was missing in their education,” von Rosenvinge said. “When Evan Bishop became principal he encouraged me to create a course based on the things the students talked about most. One topic frequently mentioned was the need for education on taxes, student loans and how to handle money.

“When I heard about the Boston Bar Association’s program I connected with Joe and secured time for him to come in and talk to the kids. Since that time he has come in with his associate Kate Foley and they spend two to three class periods — depending on their schedules — to talk to the students about credit scores, debit and credit cards, buying a car, saving for retirement and other topics related to financial literacy.”

Massachusetts Gov. Charlie Baker in January signed a new law that instructs state education officials to establish financial literacy standards for students in kindergarten through Grade 12. Hopkinton is ahead of the game, with its M. Ellen Carpenter Financial Literacy Program.

In addition to visits from Baldiga, students receive more detailed instruction in class.

“As this is a complicated and multi-layered topic, I supplement his presentation with a solid two weeks of curriculum,” von Rosenvinge explained. “I spend a lot of time on the different types of students loans, how an amortization payback schedule works, credit cards, filing for taxes — the difference between a W-2 and W-4 — and basic budgeting.”

“The grand finale is we actually take them to the bankruptcy court in Worcester, where the real bankruptcy judge has a couple of mock hearings all related to that part of it, the financial consequences if you make bad financial decisions, as you might imagine,” Baldiga said. “That’s been awesome.”

Student reaction has been very positive to the lessons being shared.

“Year after year students report that this unit is among the most useful that we cover in the class,” von Rosenvinge said. “I think the most important message that students take away is that you can’t trust anyone to do right by you if you don’t do right by yourself. They understand that they have a responsibility to be educated about financial matters in order to secure their future. There is a field trip to a bankruptcy court in the spring so students can see that even small financial missteps can have major consequences.

Added von Rosenvinge: “Bankruptcy filings are up significantly among individuals, and many of them are between the ages of 25 and 36, saddled with student debt and credit card balances ballooned by fees and late charges. My hope, as is the mission of this program, is that with some basic education on how the system works my students won’t find themselves in that situation.”

Liu to perform at Symphony Hall

Andrea Liu, a 15-year-old violinist from Hopkinton, will perform at Boston’s Symphony Hall on March 17 at 3 p.m. The Boston Youth Symphony Orchestras and Boston Symphony Orchestra are presenting a special family version of Mozart’s “The Magic Flute” as part of the BSO Family Concert Series.

Conceived by BYSO music director Federico Cortese, with stage direction by Edward Berkeley, this new abridged adaptation of “The Magic Flute” is devised especially for children ages 6 and older and their families.

Silver passes away at 18

Ashland’s Jake Silver, who became somewhat famous as he tried to live his life to the fullest after being diagnosed with terminal cancer, passed away on Feb. 22, two days before his 19th birthday.

The Hopkinton High School football team was among the groups that raised money for Silver, a onetime kicker on the Ashland High football team, to check some items off his bucket list. Silver was able to travel, attend sporting events and connect with some celebrities in the final months of his life.