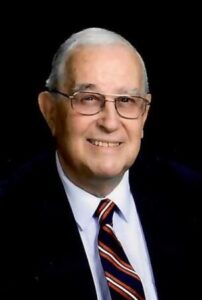 Mr. Choquette was a veteran of the U.S. Navy and a graduate of Rhode Island College of Education. He went on to receive a master’s degree in education from Wesleyan University. Prepared with these achievements, he embarked on a career with Woonsocket High School for over 30 years in several roles. He began teaching in the social studies department, then advanced to vice principal and later to principal of the school. Realizing teaching was his true passion, he returned to the classroom for the last decade of his career, continuing to teach social studies and also English and Latin.

Faith and family were the pillars of his life, and he spent his later years enjoying much time in the company of his children and grandchildren. At home, he was well known for providing help and support to his fellow residents at Chapel Hill, his retirement community.

He is survived by his five children, Emilie Mendillo and husband Thomas of North Attleboro, Paul Choquette of Warwick, Thomas Choquette of Newton, Amy Sanborn and husband Randall of Hopkinton, and Anne Clawson and husband Daniel of North Kingstown, Rhode Island; a sister, Irene Beaudreault of Woonsocket; and nine grandchildren, T.J., James and Annie Mendillo, Julia Choquette, Benjamin and Charlotte Clawson, and Cadence, Nathaniel and Cassidy Sanborn. He was the brother of the late Pauline Ladebauche, and grandfather of the late Suzanne Clawson.

His funeral will be held Monday, Aug. 23, beginning at 9:45 a.m., from the Holt Funeral Home, 510 South Main St., Woonsocket, followed by a Mass of Christian Burial at 11 a.m. in St. Aidan’s Church, 1460 Diamond Hill Road, Cumberland. Burial will be private.

Calling hours are Sunday from 4-7 pm in the Holt Funeral Home.

In lieu of flowers, memorial contributions may be made to Food for the Poor (foodforthepoor.org), an organization near and dear to Mr. Choquette’s heart and one he has supported for many years.