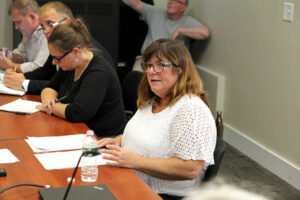 Marianne Auger, shown speaking at a Select Board meeting last month, is part of the Main Street Alliance, which was formed to oppose the Main Street Corridor Project.
PHOTO/JOHN CARDILLO

Jackie Potenzone has a warning for fellow Hopkinton residents.

Potenzone, who has lived on Wood Street for two decades and run a hair salon there for the past 18 years, said the Main Street Corridor Project should scare everyone in Hopkinton, due to the town forcing some property owners to temporarily or permanently relinquish rights to slices of land (albeit while receiving compensation).

Potenzone is one of the key figures in the Main Street Alliance, which is collecting signatures for a petition the group plans to bring before the Select Board. The ultimate desire is to get a new Town Meeting vote.

“We started [Oct. 18] and it’s been really an overwhelming response from people that support us,” Potenzone said. “Our main goal is to bring this Article 47 to Town Meeting and the repeal of the project to Town Meeting, and have the corridor residents have a chance to speak on it, to voice our concerns and our opinions, and to have a vote there that we can actually be present and know our properties are on the article. Because in 2018 when it was voted on, none of the residents were notified by mail.”

Potenzone’s property, located next to Next Generation Children’s Center, near the fork of Wood Street and Main Street, was not part of the original plan, she said she was told. However, she later was added for an easement, meaning workers would be able to access her property as needed, with the understanding it would be returned to the same condition when they were done with the project. She fought against the easement and eventually was removed from the plan.

However, she says that because her property is listed on Article 47, she is not in the clear.
“In the years that I’ve been involved with the plan, the plan has changed multiple times in front of my house,” she said. “What they say they’re going to do and what they do are two different things. And my house is still vulnerable to an easement, because I’m on Article 47. So I have just as much to worry about as the rest of the residents on that article.”
Rob Phipps, whose family has run Phipps Insurance downtown since 1950, is another member of the alliance.

“Everybody we talk to has reservations about the project but didn’t know how to muster forth,” he said. “We’re finding that when we bring up a few things, people have been waiting for this group to organize — any group to organize — to have another voice, other than Town Hall and the town manager and the Board of Selectmen and those who would benefit from such a project. There is always another side, and we’re it.”

If the board denies the alliance’s call for a new vote, the fight will not end, Potenzone promised.

“I personally will take this to court,” she said. “I will not allow an easement on my property. And I have spoken to other corridor residents and they want to protect their private property rights.”

Added Phipps: “I’m not sure what the next legal ramification is, but we certainly wouldn’t stop there if that was their attitude.”

Meanwhile, project-abutting residents and property owners were told they would receive a letter by Oct. 25 from Howard S. Dono & Associates with information about the appraisal process. In a press release, the town said that a review process will follow the appraiser’s work, and then the town will contact property owners to inform them of the amount of just compensation they will be paid for the proposed easements.

According to Phipps, the project has not addressed what it set out to accomplish, and engineers have acknowledged this is merely “the best they can do.” He said he doesn’t regret that the town has invested years and hundreds of thousands of dollars in an attempt to make the downtown better, but it should cut its losses and back out of the project.

“The reason why this kicked off in the first place, back in 2009, it was just an attempt to find out what were the issues and how do we solve them,” he said. “It was determined that the town needed to address its traffic congestion, traffic flow and pedestrian safety, and that was really it. Now so much water has gone over the dam, and nine years of expert engineering has not been wasted [but] it’s essentially proved that these issues are going to continue and this project is not going to appreciably change anything as far as the original reason why this project was conceived. That’s our opinion. We’re not experts, we don’t have all the answers. … But that’s where we’re at. We’re frustrated.”

Members of the alliance are determined to get a new vote, and they say they would accept the outcome once people are better informed.

“We want to find out where we stand with the people,” Potenzone said. “We want to know how the people of Hopkinton feel about our properties being subject to easements. Some people don’t want this project to go through, not just the alliance. There’s a lot of residents in Hopkinton that feel with the state of the town we have now, with the crisis in the schools, and with the way this project has been handled, they don’t want it to go through. We just want to ask the people. They may vote against us, and that’s fine. But at least we know where we stand.”