Editor’s note: This is a new feature in the Independent called “Hopkinton High-Five” where we salute a resident who has made contributions to the town. 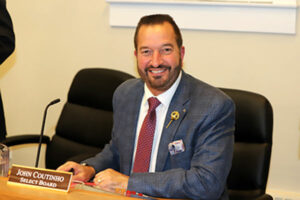 John Coutinho volunteers with numerous organizations in town, and he serves as vice chair of the Select Board.
PHOTO/CHRISTINE STRICKLAND

John Coutinho has spent a lifetime trying to emulate his parents’ spirit of volunteering.
Coutinho, who serves as the vice chair of the Hopkinton Select Board, was taught at an early age by his parents, Mannie and Frances, that success in life shouldn’t be measured by personal gains.

“For me growing up, seeing my father always volunteering, he always said, ‘John, you’re never truly successful until you give back,’ ” Coutinho recalled. “He said, ‘That’s when you can sit back and say you did enough.’ ”

Coutinho prides himself on being a servant with a familiar face around Hopkinton. In addition to his six years on the Select Board, Coutinho has spent more than a decade on the Zoning Advisory Committee and five years on the Planning Board, and he serves on a number of other committees in town.

Born and raised on the North Shore, Coutinho moved to Hopkinton 21 years ago after his sister, Cissy, recommended the town’s kindergarten program. He spent 35 years working as a mechanical engineer and industrial designer before shifting to a semi-retirement career in construction.

“I think of myself more as a full-time selectman. I’m the selectman that’s always around,” Coutinho said. “[Town Manager] Norman [Khumalo] knows [he can say], ‘John, could you come in and sign some papers? Everybody else is at work.’ I say, ‘Fine, I’ll be right in.’ ”
A typical week of Select Board responsibilities includes weeknight meetings every Monday through Wednesday and many Thursdays. Once a week, he meets with the police and fire chiefs, and he frequently stops by Khumalo’s office. It all adds up to 25-30 hours of work each week.

Without the demands of full-time employment, Coutinho makes it a priority to be where those on the board who are bogged down by regular jobs cannot.

“[I try to] go to all of the evening events, go to the Veterans Breakfast, go to the bean supper, go to wakes and funerals,” he said. “As a member of the board, it’s important that the town shows up for people that have been here and contributed a lot.”

While much of his work is done within Town Hall, Coutinho is particularly passionate about a couple of activities beyond those walls.

He serves as the Select Board’s special liaison to the Boston Athletic Association (BAA), meeting monthly with the BAA’s CEO or board of governors in preparation for the race that has made Hopkinton internationally recognizable.

“We’re four generations into the Marathon. It’s a fabric of Hopkinton,” Coutinho said. “It means about $1 million a year to the town in real money and tertiary money.”
Additionally, Coutinho is a staunch supporter of the trails in town and a member of the Upper Charles Trails Committee.

Outside of Town Hall, Coutinho is involved with his church, St. John the Evangelist, as well as the Freemasons, Shriners International and the Knights of Columbus.

Much like his parents inspired him, Coutinho hopes his volunteer work will encourage his two college-aged daughters to continue the family tradition of helping others.
“I want my kids to see that you’re either all in or you’re not,” he said.