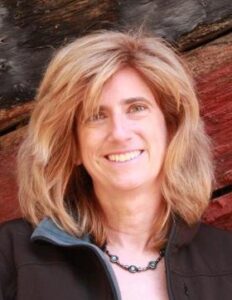 Amy Rose Beaudet, 55, of Berlin passed away on May 2 at Brigham and Women’s Hospital in Boston with her loving husband at her side.

Affectionately known as “The Solar Queen,” Amy was a pioneer in the field of renewable energy and was widely seen as one of the best trainers and communicators in the solar industry. She was a sales engineer at the altE Store in Boxborough for 14 years and was admired for her smart yet simple approach to explaining complex topics in witty, down-to-earth YouTube videos and articles. She was proud to have helped millions of people on every continent with projects ranging from lighthouses to experiments in the Arctic. Her passion for helping people around the world took her to Puerto Rico to provide local training on do-it-yourself, low-cost solar systems after Hurricane Maria devastated the island in 2017.

Amy has always been a female leader in largely male-dominated industries. After graduating from Assabet Valley Vocational High School in Marlborough, class of 1983, Amy became a professional cabinet maker. She studied electrical engineering and was a pioneer in the video conferencing industry working with several local companies. She loved nothing more than mentoring and guiding young people to follow their dreams.

Amy had a way about her that would light up a room and bring out the best in her family and friends. She loved to be outdoors sailing and racing their schooner, The Green Dragon, skiing at Sunday River or in the Alps, kayaking and hiking. Her adventurous and social spirit led her to join numerous groups including Women Who Sail, Women Black Diamond Skiers, the Sunday River Ski Community, American Schooner Association and several Assabet High School alumni committees. When it came to travel, Amy was all in. She traveled all over the world with her husband and friends immersing herself in the local culture, inspiring everyone she met.

Amy was also very interested in local politics and worked with the Berlin Conservation Commission and the Energy Committee to help improve her local community.

Family was everything to Amy. She is survived by her husband, Andy Bezanson; parents, Roger and Pat Beaudet of Gilmanton Iron Works, New Hampshire; siblings, Teresa L. Boyce of Hopkinton, Julie B. (and Dave) Carr of Oregon, Nancy E. (and Alex) Herrera of California, and David M. (and Erin) Beaudet of Conway; parents-in-law, Allan and Phyllis Bezanson of Southborough; and sister-in-law, Kristina Bezanson of West Hatfield. She adored her 10 nieces and nephews, Madeline, Gabrielle, PJ, Ben, Mia, Talia, Trevor, Jack, Camden and Nate, and her beloved vizsla, Elsie.

Calling hours will be held at the Morris Southborough Funeral Home, 40 Main St., Southborough, on Saturday, May 8, from 1-3 p.m.

Amy died after a five-year battle with colon cancer. In lieu of flowers, may we suggest a donation in her memory to The Healing Garden Support Group or Stand Up to Cancer, two organizations very dear to her heart.

← Peter Landry, 33 Mikayla Miller rally organizer wants DA to turn over case to FBI due to 'lack of transparency' →