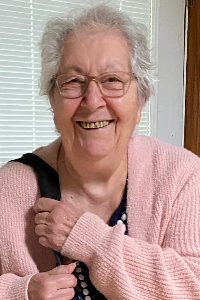 Anna F. (DeVirgilio) Hayes, 93, of Roslindale and more recently of East Bridgewater, passed away surrounded by her loving family on Jan. 13. Anna was a longtime resident of Roslindale, where she enjoyed bingo at the Norwood Senior Center, lunch at the Roche Center and many other senior clubs. She was president of the Villagers in Roslindale and worked for the Department of Unemployment for many years. Anna was a longtime parishioner of Sacred Heart Church for over 90 years, and also served as a Eucharistic minister.

She will be greatly missed by son Kevin Hayes of Roslindale, daughter Ruth Boncorddo and husband Gary of East Bridgewater, son Michael Hayes and wife Darlene of Hopkinton, daughter Linda MacDougall and husband Gary of East Bridgwater, and son Matthew Hayes of Medway, along with 14 grandchildren, one granddaughter-in-law and two great-granddaughters.

Visiting hours will be held at the P.E. Murray-F.J. Higgins, George F. Doherty & Sons Funeral Home, 2000 Centre Street, West Roxbury, on Tuesday, Jan. 17, from 3-7 p.m. A service will be held at the funeral home on Wednesday, Jan. 18, at 10:30 a.m, followed by a funeral Mass at Sacred Heart Church at 11:30 a.m. Interment will be held at St. Michael Cemetery, Roslindale. Expressions of sympathy may be made in Anna’s memory to Alzheimer’s Association, 309 Waverley Oaks Road, Waltham, MA 02452.