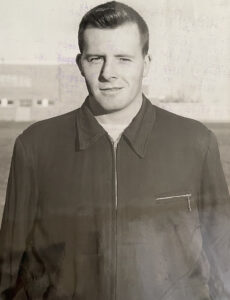 E. Aubrey Doyle, a lifelong resident of Hopkinton, passed into God’s hands on Feb. 21. Born on April 28, 1931, to W. Aubrey Doyle and Julia Halloran Doyle, Aubrey grew up on the farm at 38 Elm Street with his sister, Patricia. Aubrey was a gifted student-athlete at Hopkinton High School after overcoming polio as a young child, earning several varsity letters as well as the Outstanding Senior award at his graduation. Following graduation he enrolled at Brown University, where he studied and played football for four years, graduating in 1954. He then entered the Army, and while at Fort McPherson in Georgia he met his future bride, Joan Courchaine. They married on Aug. 18, 1955, and remained married for 66-plus years. Aubrey and Joan raised seven children: Colleen (Ray — deceased) Charleston, Lisa (Ray) Carloni, W. Aubrey (Julie) Doyle, Julia (Paul) Rice, Sean Doyle (deceased), Tim (Sonya) Doyle and Brendan (Deena) Doyle. He leaves behind 21 grandchildren, 13 great-grandchildren and many nieces and nephews.

After the service, Aubrey began a long career at Hopkinton High School, spanning more than 35 years. He served in many roles, including math teacher, math department head and coach of multiple football, basketball and baseball teams before eventually becoming the head varsity football coach in the late 1960s through the early 1970s. He also was the athletic director for 20-plus years. The gymnasium at the middle school was named in his honor. He was an inductee in the inaugural HHS Athletic Hall of Fame class.

After retiring from HHS, Aubrey went on to own and run the Star Package Store on Main Street in Hopkinton for a number of years.

Aubrey truly appreciated everyone who gave him opportunities throughout his life and career and did his best to do the same for others.

Calling hours will be Sunday, Feb. 27, from 2-5 p.m. at Callanan Cronin Funeral Home on Church Street in Hopkinton. A funeral mass will be held on Monday, Feb. 28, at 10:30 a.m. at St. John’s Church in Hopkinton. Burial will follow in St. John’s Cemetery, Hopkinton. The family requests that all attendees wear masks at both the wake and funeral.

In lieu of flowers, the family would appreciate any donations be made to the Hopkinton Boosters Club, P.O. Box 33, Hopkinton MA 01748 for student-athlete scholarships.