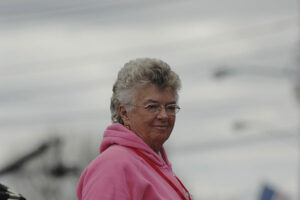 Hopkinton native Rosalie Baker-Brown will continue the tradition of a member of the Brown family starting the Boston Marathon when she starts Wave 2 this year.

For more than 100 years, a member of the Brown family — Hopkinton and Boston’s iconic sports family — has started the Boston Marathon, and that tradition will continue with the 123rd edition of the race in 2019.

The Boston Athletic Association selects starters for Wave 1 and all earlier starts, but since the race implemented a wave start in 2006, the BAA has given the Hopkinton Marathon Committee the honor of selecting starters for later waves. This year, on the its 40th anniversary, the HMC chose a beloved Hopkinton native, a high-ranking military official, and a former HMC chairperson. Rosalie Baker-Brown will start Wave 2, Gen. James McConville will start Wave 3, and Bob Champney will start Wave 4.

“We’re happy to be able to honor some people who have been important parts of the history of our town, the Boston Marathon, and the Hopkinton Marathon Committee,” HMC chair Dorothy Ferriter-Wallace said. “Hopkinton native Rosalie Baker-Brown and former Marathon Committee chair Bob Champney are wonderful people who have been a part of Hopkinton’s Boston Marathon history and we’re honored to have them as starters. Since the Boston Marathon falls on Patriots’ Day, we’ve made it a priority to recognize veterans and members of our military. We were thrilled that General McConville will also be able to return as one of our starters.”

Baker-Brown, born and raised in Woodville, was one of 10 children in her family. She had five children of her own and later married Tom Brown, the Hopkinton postmaster and son of George V. Brown, commemorated permanently on the Hopkinton Common with “The Starter” statue. An accomplished athlete herself, Baker-Brown was one of the inaugural Hopkinton High Athletic Hall of Fame inductees, after playing every sport available to girls at the time —basketball, softball and cheerleading. She later became a nationally certified basketball official, and officiated for 30 years. Turning 90 this year, Baker-Brown said she likely would have run the Boston Marathon in her younger years if women were allowed.

Baker-Brown remembers watching the marathon as a child. Her family would pack peanut butter and jelly sandwiches and fruit and drive back roads to Ashland where they would wait to see well-known runners like Tarzan Brown, Clarence DeMar and Johnny Kelley.

“It had all the world-famous runners,” she said. “But the marathon was always a family day.”

Several members of Baker-Brown’s family, including her sons and her granddaughter, have run Boston. Now a resident of Yarmouth, Maine, Baker-Brown will always remember her Hopkinton and marathon roots. She has traveled extensively and said, “No matter where you go, everyone knows the Boston Marathon, and they all know it starts in Hopkinton.” 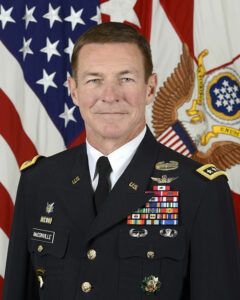 Gen. James McConville, the vice chief of staff of the U.S. Army, will start Wave 3. McConville, a Massachusetts native, ran the Boston Marathon in 2017.

McConville, the vice chief of staff of the U.S. Army, will start Wave 3. The highly decorated general ran the 2017 Boston Marathon with his son and Gen. Joseph Dunford, chairman of the joint chiefs of staff. The Hopkinton Marathon Committee has made a point of honoring veterans and the military on Patriots’ Day. McConville graduated from the U.S. Military Academy at West Point, earned a Master of Science in aerospace engineering from Georgia Tech, and was a 2002 National Security Fellow at Harvard University. While his duties have taken him around the world, this area holds special meaning.

“Born and raised in Quincy, Mass., it’s an honor to support the Boston Marathon,” McConville said. “It’s an even bigger honor to be the official starter of Wave 3. Boston is not just a place with a rich history, it’s also an attitude — a WINNING attitude. The men and women running on April 15th are all winners.”

“In those days, the committee did all the setup,” he said. “We’d be setting up all the barriers early Sunday morning.”

On the day of the marathon, he would check in at all the different staging locations around town, making sure all was taken care of for wheelchair athletes, elite runners, volunteers and more.

“I hustled around. I didn’t have a cart or anything. I just walked,” he said. “It was like I ran a marathon.”

After his retirement, Champney worked details for the Hopkinton Police Department and always worked on Patriots’ Day. Despite his close involvement with the race, he said one of the most memorable marathon years occurred in the 1970s, shortly after he had moved here with his wife, Barbara, and young children, Kevin and Kara. They had gone to set up chairs near the start on Hayden Rowe when young Kevin asked to walk up to meet his friend’s family by the library. He never made it, and couldn’t find his way back to his family, but instead walked to his babysitter Rachel Bartlett’s house on Maple Street. Bartlett walked him back toward his house and they watched the start from a porch on Hayden Rowe before reuniting Kevin with the rest of the Champney family. When Bob asked his son who he watched with, he said, “Some old guy.” That old guy turned out to be actor Paul Newman, who was in town while his wife, Joanne Woodward, filmed “See How She Runs.” The movie included a crowd scene featuring a large number of children, so Center School students were dismissed early one day to be part of the shoot. When the Champneys watched the movie to see if they could spot their children, they got a surprise in a scene after the start of the marathon. The film showed a single person running down the road. Champney realized it was him, even though he had no idea he had been filmed.

The Hopkinton Marathon Committee-honored starters will join the Boston Athletic Association-named starters to set the waves of runners toward Boston at the following times: