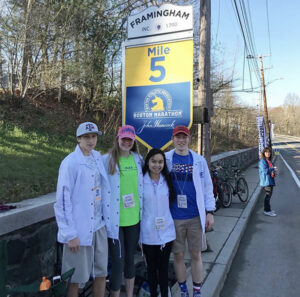 Close to 40 Hopkinton High School students will be an integral part of this year’s Boston Marathon on April 15 as they volunteer for the WBZ-TV Spotters Network.

The Spotters Network, known as “the eyes of the Boston Marathon” for the television station, provides live updates at each of the mile markers for the anchors back at the studio. Over 100 high school and college students from towns that border the Boston Marathon route will be part of this year’s network, with a majority of them from the town where it all starts — Hopkinton.

“We have been doing this for quite a few years,” said HHS senior Sam Cote, who has been a spotter for WBZ the past four years and heads up the Spotters Network volunteer recruiting for his school. “We are the eyes of the station during the race and help them with their live broadcast by giving them info about runners’ times and who is in what place as they run by.”

The spotters are responsible for tracking the progress of the runners and relaying the information back to the studio immediately.

“It gives [WBZ] a competitive edge,” Cote said. “Helicopters and lead cars don’t always catch new developments at each mile. It gives a special element to the broadcast.”

HHS junior Kayla McCann, a cross country runner who will be a spotter for the second time, said she is excited to be a part of the iconic running tradition again this year.

“Most years I have just been a spectator, but I loved being a spotter,” she said. “It felt like we were doing something productive; something super unique.”

Although McCann didn’t know where she would be stationed, last year’s spot at Mile 11 in Natick was the perfect one, she said.

“It was a good spot, because by then people weren’t all bunched up,” she said.

The Spotters Network was founded in 1985 by Fred Tressler and Hopkinton’s Tim Kilduff, who was the Boston Marathon race director in 1983 and ’84. Spotters are required to attend a training session at the WBZ studio, and then must be prepared to rise in the “dark hours of the morning” on race day to get out to one of 26 different mile markers before to roads get shut down, according to Cote.

“We have a lot of volunteers this year, so we are looking good,” he said. “It’s great to be part of the success of the day. It’s a great honor.”