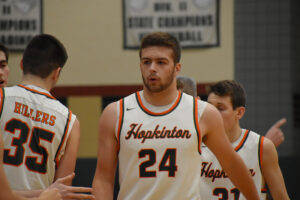 After 19 seasons as the Hopkinton High School boys varsity basketball coach, Tom Keane experienced a “first” heading into the final week of the 2018-19 regular season: not a single player on his team was scoring more than 10 points per game on average.

The Hillers, who took an 11-6 record into mid-February and are bound for the Central Massachusetts Division 2 playoffs, have six players scoring between five and nine points per night. Junior guard Tommy Ambrosone, senior forward Brendan Kelly and junior shooting guard Steve Maffiore all check in around eight points per game.

“Every night it’s a different guy,” Keane said. “The ball movement this year has been really fantastic, it’s not one guy dominating the ball, it’s a lot of different players getting the job done.”

Keane’s players are filling up the stat sheet. In addition to his 8.7 points per game, Ambrosone averages five rebounds and three assists, and he’s the team’s best on-ball defender. Kelly has chips in an average of five boards of his own. 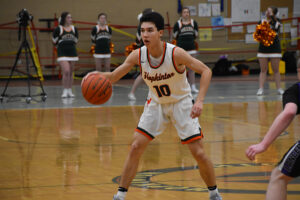 Junior guard Tommy Ambrosone contributes in all areas for the Hillers. PHOTO/JERRY SPAR

Hopkinton has tried to play an up-tempo style all season long. If the layup isn’t there at the end of the break, however, Keane said his team has done a good job making the extra pass and finding an open player. The Hillers have taken care of business in the Tri-Valley League, winning 11 of their 15 league contests prior to their finale against Norwood last Friday.

The seniors, Keane said, have been a big part of the Hillers’ success. Kelly is a captain and a three-year varsity player. Another senior, point guard Michael Poovakad, is a co-captain. Forwards Mac Lind, Ryan Kester and Nick Hynes and guard Evan Sisitsky also are contributing in their final season in the program.

Hopkinton’s success may have caught some teams in the area by surprise after the Hillers lost their top player from a season ago, senior Ben McKenzie, to a shoulder injury. But even without any “stars” in the traditional sense of the word, Keane suspected his would be a tournament team from the beginning of the year.

“We had a lot of kids returning and we made the tournament last year, so I was hoping to get back,” he said. “I knew we had some great players coming back, so even though we lost a very good player, I knew a lot of the guys had a good chance at stepping up.”

The balanced lineup has made Hopkinton potentially a tough out in the playoffs as teams cannot hone in on stopping any one player.

“We are hoping to make a very good run in the tournament,” Keane said. “We have a lot of guys who can shoot and we have been playing great, pressure defense and sharing the ball. As long as we take care of the basketball, I think we have as good a chance as anyone.”