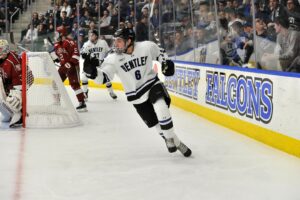 Hopkinton’s Brendan Hamblet is part of an up-and-coming hockey program at Bentley University.

The Bentley Falcons surged through a month and a half of hockey, earning points in 11 straight games and rattling off seven wins in a row in January/February, and Hopkinton’s Brendan Hamblet has become a key cog for the Division 1 program.

The streak gave the Falcons a record above .500 both overall and in the Atlantic Hockey Association and has given fans plenty to cheer about as they pack the team’s new on-campus arena in Waltham.

“It’s been a great experience here,” Hamblet said. “Especially in the new rink. It’s made it feel like a true D1 school and it’s been an unbelievable year.”

Through 22 games, the 20-year-old sophomore had scored seven goals and added 10 assists. He found the back of the net in overtime to give Bentley an overtime win over Air Force on Feb. 1 to make it four wins in a row for his team.

“It helped us keep the streak going,” he said. “It was a special moment.”

And the game happened at home, which means there were plenty of friends and family of Hamblet’s there to soak it in. His parents, Scott and Lisa, are at every home game, he said. His grandparents, younger brother Tommy and older brother Brian — when he’s not going to school at Indiana — also are frequently in attendance, along with other members of what has been a crowded cheering section for the 2017 graduate of the Rivers School in Weston.

“I would say I have used all of my tickets for every game we have played at home,” Hamblet said, noting his parents also travel to any road game that’s within a four-hour drive.

Adjusting to the college game, especially playing for a Division 1 program, has not been without its challenges. Hamblet, listed at 5-foot-11 and 180 pounds, noted the size and strength of the players he competes against on a nightly basis. But he said the speed of the game has been a smoother adjustment. He’s put together some memorable moments in his still-young collegiate career, including the overtime winner against Air Force and scoring his first career goal against Northeastern.

In the short term, Hamblet said said his goal is to help his team win a conference title and get to the NCAA tournament. Long term, he said he’d love to play professional hockey.

“That’s been a dream of mine since I was a kid, obviously playing in the National Hockey League would be a dream come true,” he said. “It would be a lot of hard work, but to get an opportunity, that’s all I can ask for.”

Hamblet said he has some dreams off the ice as well, namely using his education at one of the nation’s top business schools to go into the financial industry. He said his mother, who also works in the business world, has been an inspiration on that front.

In the meantime, he said he’s just appreciative to have his family close by and able to cheer on his success on and off the ice.

“They support me at every game,” Hamblet said. “They tell me to keep it up, keep it going and keep having fun.”