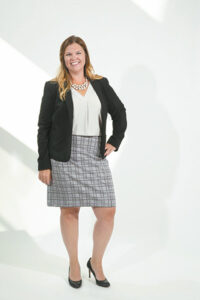 Hopkinton’s Sarah Baldiga recently won a business award for her work with the Rise Above Foundation, which she cofounded in 2009.

She was a high school junior, in foster care, looking forward to her prom but unable to afford a dress. When she heard about the Rise Above Foundation, she reached out to the organization for help and received the equivalent of a visit from a fairy godmother: a gift card that allowed her to pick out a dress from a nearby store.

The student wrote in her letter: “I had one of the nicest dresses at prom. I stood out, and this time it was in a good way because I thought I would get an old borrowed dress, but that was not the case this time thanks to you.”

About 10,000 foster children are registered with the state Department of Children and Families. Foster parents receive only about $23 a day to take care of them, so normal youth activities like team sports, music lessons and class trips often are unaffordable.

RAF helps bridge that gap every year, striving to provide foster children with the kinds of experiences meant to build self-esteem and a healthy social being.

“Rise Above is really committed to giving kids in foster care the same opportunities that their peers have and build positive memories and have a happy childhood,” said Hopkinton’s Sarah Baldiga, the organization’s cofounder and executive director.

The organization has raised more than $1 million in foster care funds alone since its inception.

RAF is a 501(c)(3), meaning it is exempt from federal income taxation, and operates through an online application process. Caretakers of foster children, DCF social workers and even foster children themselves may request funding for a wide array of opportunities, from musical instrument practices to concert and theme park trips to religious celebrations and more.

The nonprofit serves about 1,100 youths per year, with that number increasing annually.

People helped by the nonprofit often send back thank you notes talking about their experiences.

One girl wrote about her karate camp and how she learned the meaning of perseverance, that “if you fall down, you get back up again.” 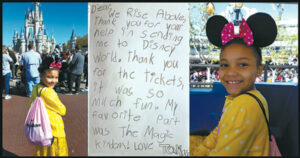 The Rise Above Foundation provides assistance to foster children, in one case sending a grateful young girl to Disney World.

The foundation also hosts several social functions each year for foster children. Examples include a trip to Legoland Discovery Center Boston and an evening at the (since-closed) American Girl store in Natick, both held this past March.

Through Oct. 25, the nonprofit also welcomes donations to its ongoing program: college care packages. Foster college students will receive these packages containing a mix of school supplies, hygiene items, and snacks for the students’ dormitories.

For both those looking to contribute items and students in need, a list of needed items can be found on the RAF website. In its fifth year, the program has sent well over 1,000 packages total, about 400 packages a year.

The foundation also celebrated its 10-year anniversary this past May with a party in Worcester, where patrons raised more than $70,000 for RAF use.

Baldiga recently was named as one of the Worcester Business Journal’s 40 Under Forty, an honor bestowed on those who achieve outstanding accomplishments in Central Massachusetts.

“I feel really honored by it,” Baldiga said, and then laughed. “It’s also a little bit embarrassing in some ways. Rise Above has been such a huge team and community effort and I feel humbled to lead it.”

“It was sort of their idea,” Baldiga said. “A need that they saw with the kids they were working with — that they were missing out on sports, prom and music because there weren’t funds available for them to participate.”

Baldiga encourages people to learn more about the nonprofit at its website, weriseabove.org.