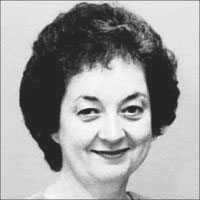 Barbara A. (Bingham) MacKenzie of Cumberland, Rhode Island, formerly of Somerville and Milford, died Oct. 28. She was the beloved daughter of the late Ralph and Eileen Bingham. She was the loving mother of Scott MacKenzie and his wife, Shannon, of Plainville, and Kristen Turner and her husband, David, of Hopkinton. She was the sister of Eileen Breckell of Troy, New Hampshire, Ann Charette of Needham, and the late David Bingham. She also is survived by four grandchildren. She was the former wife of Ralph MacKenzie of Wilmington.

A prayer service was scheduled for Nov. 9 at Keefe Funeral Home in Arlington, followed by burial in Saint Paul’s Cemetery, Arlington.