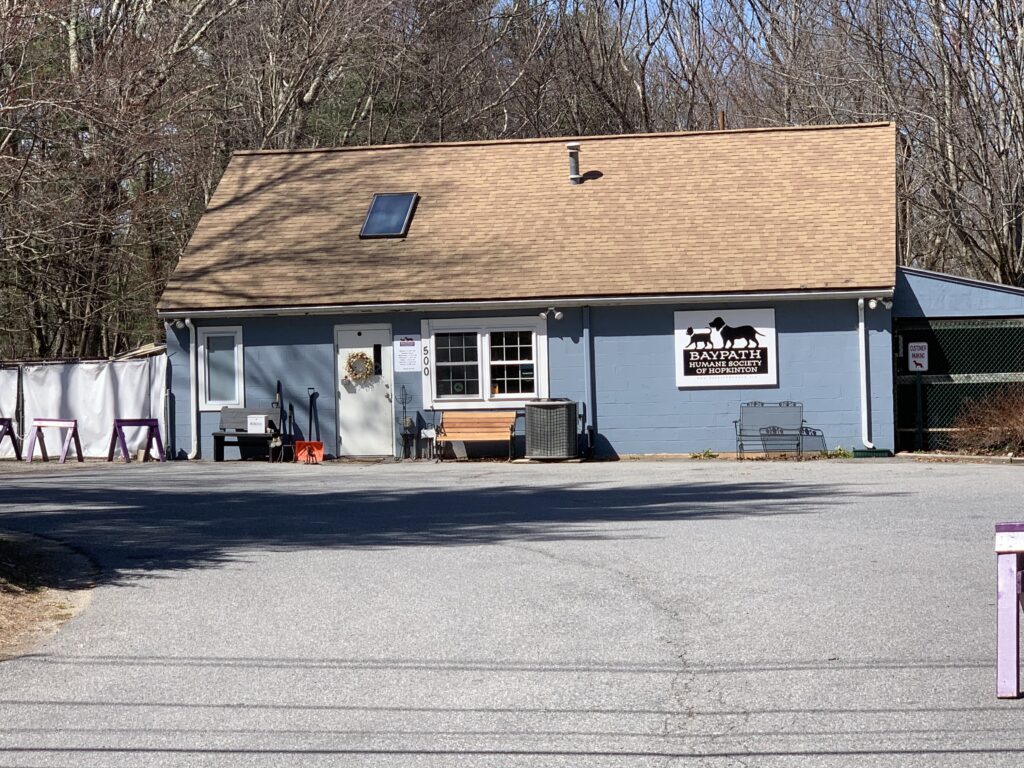 Baypath Humane Society is looking to relocate from its current home on Legacy Farms Road North and construct a bigger facility on town-owned land on Fruit Street. PHOTO/JERRY SPAR

Select Board members unanimously agreed to the town manager’s suggestion to lease town land at 66 Fruit St. to the Baypath Humane Society of Hopkinton, which plans to build a new facility at the site.

The society has outgrown its current 2,000-square foot building, she said. The new structure could be about 7,500 square feet.

“Our business has grown,” Jefferis said. “This facility is not enough anymore to engage the community in a way we want to engage them.”

The additional size would help “minimize animal stress and mitigate disease,” she added.
Increased capacity also would allow the shelter to offer more community space, which Jefferis said was a critical part of the society’s mission.

The added space could accommodate a multi-purpose room for educational initiatives, including training, providing spay/neuter programs and getting more young people involved in the society’s work. “Adoption is the main thing, but not the only thing” in the society’s mission, Jefferis said.

The town put out a parcel of its land on Fruit Street — located along the access road to the Fruit Street athletic fields — and asked for proposals to lease it. The humane society was the only entity to submit paperwork.

Once the terms of lease are settled, Baypath will begin a capital campaign for a new facility. The structure would be paid for by private funds, Jefferis noted.

A new building is not likely to open for at least three years, Jefferis said, to allow for planning and fundraising efforts. Recent economic impacts of the coronavirus outbreak could further slow the process.

In the meantime, operations are set to continue at the current site.

The society takes in, cares for and adopts out animals, both those brought in by local animal control departments and from out-of-state partners. Jefferis said Baypath takes in 800 to 1,000 cats and dogs per year.

The approval of the lease is subject to successful negotiations between the town and the society.