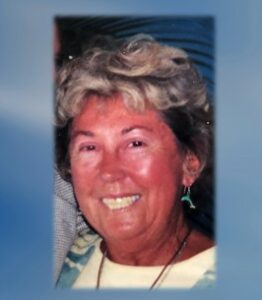 Betty Jean Fowler, a resident of Sudbury, passed away peacefully on Nov. 17 in Framingham.

She was born July 14, 1929, in Toledo, Ohio, to Eugene McKinley Fowler and Bernice Fowler. At 15 years old, Betty and her family moved to Hollywood, Florida, where Eugene “Bud” Fowler opened the famous Fowler’s Fine Food on the Circle. He would go on to open another very successful restaurant in Ft. Lauderdale, where the entire family was involved in the business for many years. As a teen, Betty attended Pine Crest School in Ft. Lauderdale. She married John Gibney in 1947 and moved north, where she began a new life.

Betty spent many happy days picking up shells on beaches from Florida to Cape Cod. She was an accomplished knitter, a championship golfer and excellent cook, traits that she passed along to her children and grandchildren. Betty remained mentally acute her entire life, thanks in large part to her continual letter writing to her family and grandchildren and her uncanny ability to win at Scrabble. She remained devoted to her family until her last breath. The family asks you to remember Betty when you are walking along the seashore.

Private services were under the care of the Acton Funeral Home (actonfuneralhome.com).