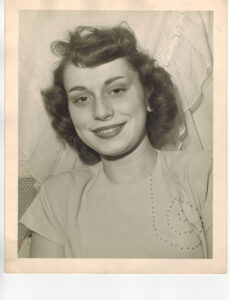 Beverly A. (Elian) Moberg of Hopkinton died on June 6 at the age of 90 after a long and wonderful life. She was born in Worcester on Jan. 2, 1930, to George and Ruth (Rylander) Elian. She grew up in Worcester and graduated from South High School as a Horace Mann Scholar. After high school, she graduated from the Salter Secretarial School and began her career as a legal secretary. She trained to be a title examiner and subsequently worked for several attorneys and title companies. She retired from Hobbs Abstract Company in 1989.

Bev is survived by the love of her life, Donald L. Moberg, who she married in 1950. They celebrated 69 years of marriage on Oct. 14, 2019. She was the loving mother of four children, including Richard P. Moberg, married to Sandra (Gingolaski), of Hopkinton; Robert S. Moberg, married to Wendy (Wheeler), of Bluffton, South Carolina; Janet Beck, married to John Beck, of Northboro; and Ronald G. Moberg of Worcester. She also leaves nine grandchildren, Amie Thomas, Andrea Joinville, Michael Moberg, Jeff Moberg, Kim Bourassa, Dan and Tom Beck, and Tim and Chris Moberg, as well as nine great grandchildren, Javaun, Chase, Angelise, Mac, Ace, Easton, Jordynn, Allie Mae and Eli. She was predeceased by her brother, Fred Elian.

Beverly lived in Grafton for many years before retiring and moving to Sandwich on Cape Cod in 1989. She and Don traveled extensively in the U.S., took cruises to Scandinavia, Hawaii, Iceland and Nova Scotia, and spent many winters on Marco Island, Florida. She took art lessons after retiring and became a prolific artist, painting for her church, family and friends. She was a member of First Church of Christ, where she served as a deacon and was a member of numerous committees. Beverly also served as a volunteer for the Thornton Burgess Museum and the Greenbriar Jam Kitchen. She was a member of the Red Hat Ladies, the Hyannis Chapter of the Mended Hearts organization, the Sandwich Friday Ladies Luncheon Group, and the Divas — a group of very special friends.

In 2017, she and Don moved to Golden Pond Assisted Living in Hopkinton.

There will be a celebration of her life on a later date. Beverly lived her life by the Golden Rule and cared deeply for family and friends. She will be greatly missed by those who knew and loved her. In lieu of flowers, please make donations to St. Jude Children’s Research Hospital, 501 St. Jude Place, Memphis, TN 38105.

← Letter to the Editor: Coutinho 'shows up for everyone' School Committee approves reduced budget →