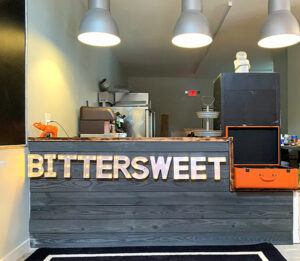 Bittersweet’s new location is expected to be open any day now, according to owner C.J. Dunne.

It’s been a long road for Bittersweet Co. owner C.J. Dunne to finally be able to open his new Main Street location. The café hit some bumps over the last nine months or so, causing it to remain closed. Still, when Bittersweet does reopen, it will be nothing but sweet for Dunne and his employees.

For months, loyal customers have been eagerly waiting to see the café, bakery and espresso bar’s front doors swing open to welcome them back. Initially, Bittersweet was initially expected to open in April, then June. However, as Dunne explained, he had to take a step back to focus on something more important.

“I had to step away for a bit due to ill health,” he said.

In an interview in early December, Dunne said he now expects his business to open shortly after final inspections are approved. Initially he thought he’d be opening on Dec. 1, but soon after realized that was not a realistic date.

One of the latest and biggest undertakings for the eatery was installing an enormous grease trap in order to to meet regulations.

“It takes up so much of the building,” he said.

A Dec. 16 inspection was scheduled for the business, and Dunne said within days of that he was hoping to have the approval from the town to open his doors.

The owner said he felt bad for having to keep his business closed for so long.

“I think the community lost out more that I did,” he said. “They missed this place. I believe it’s a great gathering spot that’s unpretentious and casual.”

For quite some time, Bittersweet has been in the middle of a big transition, moving from its original location at the historic Hopkinton Supply Co. building to its new space next door at 22-24 Main St. The café has added beer and wine to its menu and was approved for an entertainment license earlier this year.

Back in May, during a hearing with the Zoning Board of Appeals, Dunne explained live entertainment will take place on certain evenings and include low-key acts such as acoustic guitar, poetry readings, DJs and possibly independent movie nights. The music is expected to be background sound in order to allow customers to talk. A new logo was created, too.

With the exception of a few Sundays, Bittersweet will be open seven days a week, much to the delight of Dunne and his regular patrons.

“I’m really anxious to open,” Dunne said. “My customers are like family to me. The wait will be worth it when we finally open.”