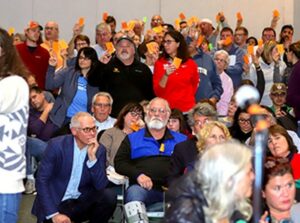 Supporters of the Main Street Corridor Project stand and hold their voting tickets to be counted during the Special Town Meeting on Dec. 9.

Perhaps years from now this will be remembered as nothing more than a bump in the road for the Main Street Corridor Project.

Those who opposed the project had their say, and the town remained committed to improving the downtown area. Almost 800 residents made their way through the rain into Hopkinton Middle School for Special Town Meeting on Dec. 9, and the vote to continue forward won out overwhelmingly, as Article 1 was defeated 504-278.

“It was great to see so many residents brave the weather and participate in the purest form of democracy on the planet,” Select Board member Brian Herr stated via email the day after the meeting. “The vote for the Corridor Project was loud and clear. Town Meeting reaffirmed their support for the project to proceed as designed.”

Added Select Board chair Brendan Tedstone: “Regardless of the outcome at Town Meeting, it was nice to see the meeting so well attended. The dialogue that transpired was cordial, kind and accepting of others’ points of view. Although it’s known that I was against the concept of calling a Special Town Meeting, it’s in our charter and it’s something I support. Seeing the auditorium as packed as it was is proof positive that when an issue is close to ones heart, it will get the vote out. I’m even more proud to be a Hopkintonian today than yesterday.”

At a previous Select Board meeting, Herr proposed starting the project the same day as the 2020 Boston Marathon (April 20). There are a number of steps that need to be completed before then, but it remains a possibility.

“The Select Board will work with town staff and town counsel to finalize the details and get the project out to bid,” he said. “We are optimistic that a groundbreaking will take place in the late afternoon of Marathon Day 2020!”

For those opposed to the project who formed the Main Street Alliance to fight it, they can take some solace in the fact that they forced more discussion — and some concessions in the form of fewer and smaller easements — before the final decision was made. 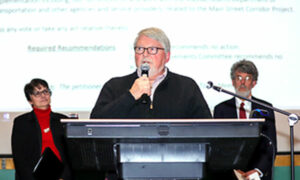 “The town has spoken and the message is clear, so while the result was not what we worked for, we are left to hope that our concerns become lessened with time,” said Rob Phipps, a former longtime resident who still owns Phipps Insurance on Main Street.

“Frankly, we are comforted that our efforts had a hand in the excellent turnout and feel the vote was definitive enough to allow us to move on. We trust the transition from the ‘old’ downtown to the ‘new’ one will be as seamless as possible, on budget and on time. We thank all of our supporters and pray the improvements promised will stand the test of time, as Hopkinton has since 1715.”

Perhaps most importantly, the opponents got their chance to be heard, which they insist they did not get when the easements were approved at Town Meeting last year. 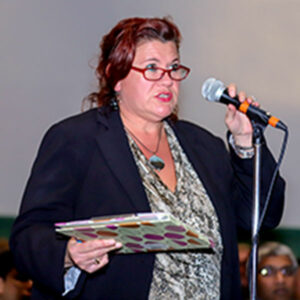 Downtown abutter Jackie Potenzone makes her case as to why she believes the Main Street Corridor Project should be halted.

Jackie Potenzone, who lives and runs a business at 12 Wood Street, next to the Main Street/Wood Street intersection, said the town did not make it clear enough whose properties would be affected when the 2018 Town Meeting vote was held.

Dale Danahy’s family owned Colella’s Supermarket for 70 years before selling the building and land at 61 Main St. to Crosspoint Associates in 2015. The building now houses a CVS along with Marty’s Fine Wines.

The property is the one most affected by the project — at least in terms of property lost — as the town wants to take land alongside Route 85 South to straighten the intersection with Route 135. This would result in the loss of 20 parking spaces alongside the building.

Danahy said spoke to Crosspoint representatives the morning of Special Town Meeting, and they expressed concern about the company’s discussions with the town. She described the negotiations as being at an “impasse” and questioned what the cost would be if eminent domain was used.

“Negotiations are still ongoing,” responded town attorney Ray Miyares. “We have not been told by Crosspoint that the negotiations are an an impasse. What we have been told is that Crosspoint is waiting to see what happens at Town Meeting tonight to decide how it would like to proceed.

“We have a fully fleshed-out negotiation agreement that has been wordsmithed to death by the attorneys, including us. The donation agreement provides that the town will pick up the costs of certain improvements to accommodate the concerns that have been raised.

“If it turns out that negotiations go off in a different direction, we always do have the right to exercise eminent domain, but that is not something that we are currently planning to do.”

Ken Weismantel, who served on the Planning Board during much of the planning for the project, noted that until the town included a plan to straighten the Route 85/135 intersection, the project “didn’t have enough points” to sway Massachusetts legislators and lock up state money, which is funding the majority of the estimated costs of the project.

Not all abutters expressed opposition to the project. Christopher Stoppiello, who lives at 121 Main St., spoke in support of it.

Stoppiello said he had a “great” experience working with engineering firm VHB, which altered the design so it would not impact his property as much as originally planned.

“My wife and I moved here four years ago from Boston,” he said. “We picked Main Street hoping that it would be great to continue walking to bars and restaurants and points of interest. And we don’t feel safe walking on Main Street now.”

Safety also was an issue raised by resident Ed Harrow, who made a presentation to back up his point that the proposed two-way bike lane is a poor choice primarily due to the topography and the numerous cut-outs along the downtown corridor.

“It is patently dangerous, and widely recognized as such,” he stated.

The meeting, scheduled to start at 7 p.m., was delayed by more than an hour because there were so many residents — many of whom were queued up outside in the rain for 15-20 minutes — waiting to register and get inside Hopkinton Middle School. After the auditorium filled up, the overflow crowd — about 200 people — was seated in the gymnasium across the hallway.

The public comment portion of the evening was generally polite and respectful, despite strong feelings on both sides. At 10 p.m., after almost two hours of presentations and public comment, the vote was held, and the project’s supporters claimed victory — with some acknowledgement of the abutters’ sacrifices.

Said project supporter John Jannino: “You take the good with the bad and you move forward.”